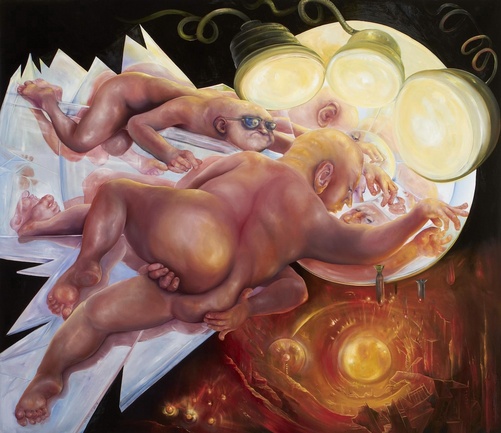 Chicago has a long history of political activism, commentary and dissent. Labor, civil rights, anti-war and women’s movements all had strong base if not genesis here. The artists I have chosen for “the Alternative Art Guide ” continue this tradition.

Three political artists, unapologetic and unblinking. Three artists with a Chicago connection.  Jeramy Turner lives in New York City, but met and worked together with Mary Ellen Croteau during the 1990’s in Chicago.  Alfonso Nieves Ruiz immigrated to Chicago from Mexico 10 years ago, and in the past 3 years, he and Croteau have been in many of the same exhibitions and found common cause in their work.  Both Turner and Nieves Ruiz have shown in Croteau’s Chicago window gallery, Art On Armitage.

Their common language and focus is one of political critique.  They are appalled at the current state of affairs in the world and wish not just to comment on the situation, but to pull open and force eyes to see the crisis facing humanity.  They are not offering solutions, since the solutions are out of their control.  But like town criers or bell ringers, they seek to alert the drugged and somnolent populace to the dangers, as well as express their own rage against the machine.

Jeramy Turner’s works are large scale oil paintings filled with fat bald men, financiers and pillars of capitalism, captured in the throes of fear and desperate ferocity.  The landscapes are often shattered scenes of war-torn rubble — a 21st century version of Ovid’s Metamorphosis, where gods vie for power over the wasteland they create. 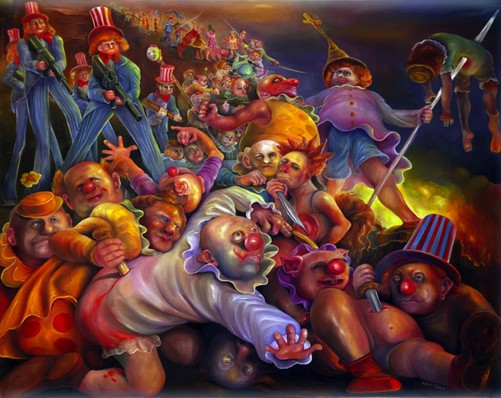 “Operation Iraqi Liberation” is a condemnation of the US invasion of Iraq.   A creature lies on its back, an open-wounded monstrosity, with only remnants of any human likeness. It is gold plated in the manner of armoured knights, functionally meaningless and absurd.  It waves a pathetic little flag in its claw-like grip, announcing victory over the devastated land.  “Endangered Species” is a mock fantasy of a future in which nature blooms and the financiers are reduced to tiny chameleon creatures hiding in the underbrush. 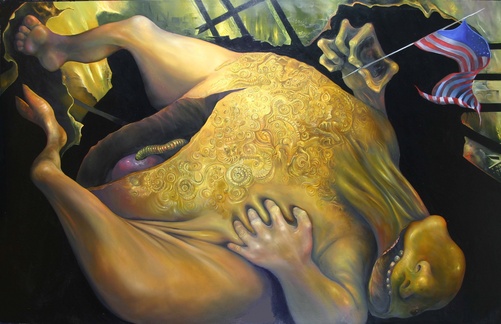 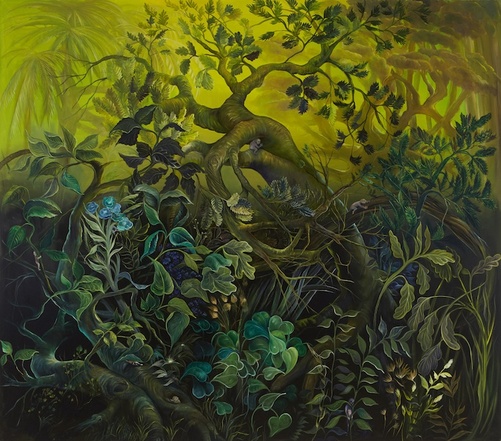 Turner’s work is often misinterpreted as fantasy art, dream depictions and psychological expressions, but these images are meant to disrupt complacency.  Her technique is masterful, evoking classical paintings which lure you in, only to assault the senses and challenge assumptions about what art is. 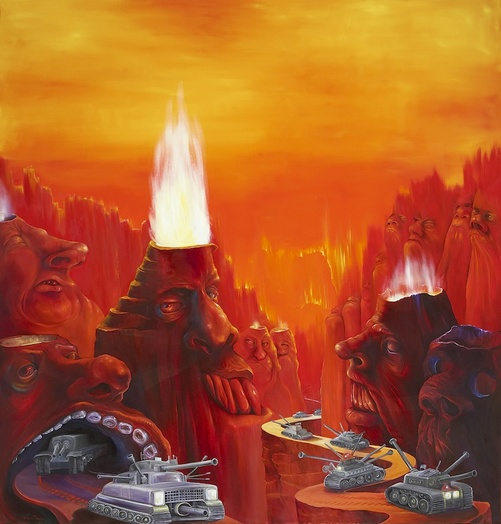 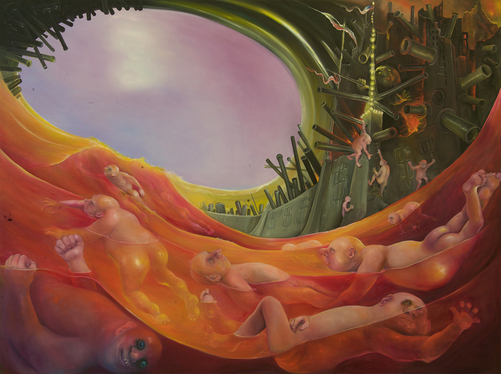 What emerges from Alfonso Nieves Ruiz’s dark and cramped workspace are wondrously constructed three dimensional infernos from Dante. Not a Biblical hell, but rather the bowels of US imperialism nakedly presented. Within each figure lurk multiple terrors. Enslaved, tortured bodies reveal themselves inside every crevice. Ruiz’s work is masterful and fascinating in is specificity and its beautifully rendered grotesqueness. It is certainly not pleasant, nor falsely optimistic. 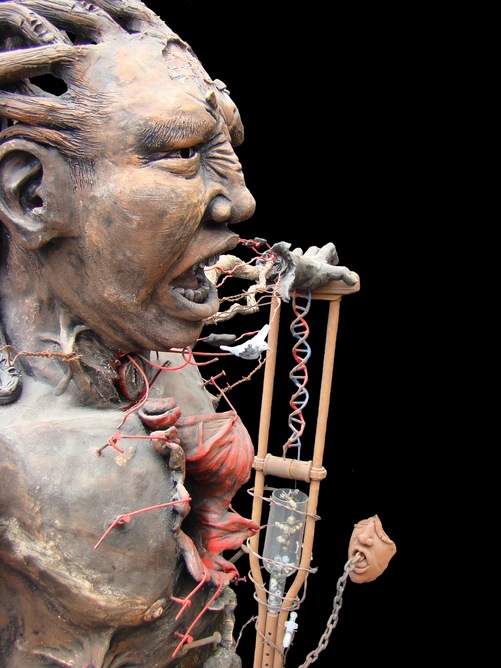 “Hambriento” (“Hungry”) is a corpulent king who sits on a throne of garbage, shitting out more into the sewer of the cast-offs of consumerism. His body decomposes and transmogrifies into open mouths with tongues hanging out for more. Clutching a fistful of gold in one hand and a globe in the other, he has a bull and a pig to support him – unwilling creatures forced to stand in for capitalist greed. Inside, through his ulcerated flesh, one sees a starving person holding an empty plate in a desolate landscape, both feet in a grave. 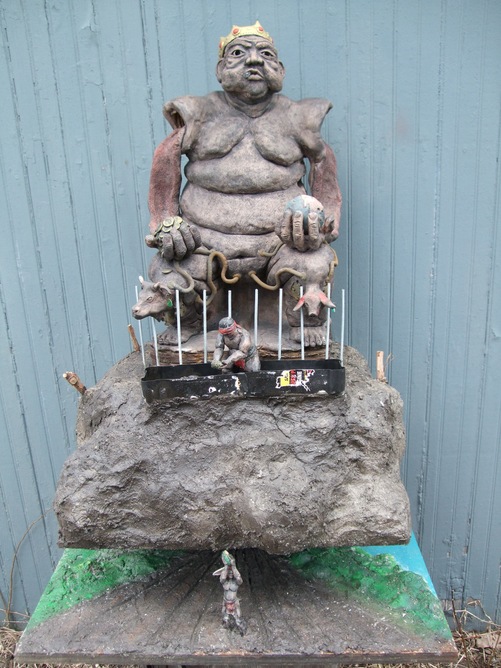 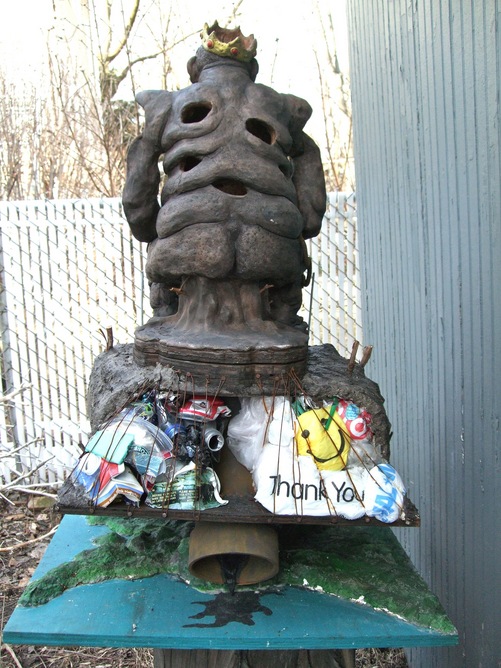 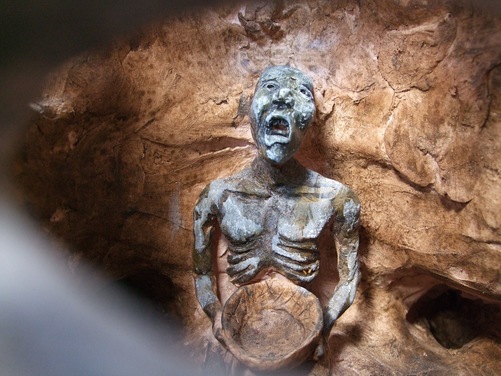 His clay figures and assembled sculptures are both beautifully rendered and incredibly insightful commentaries on 21st century ethos.  Each piece presents surprise after surprise: as one discovers figures inside of figures, the cry for humanity can be heard quite clearly. 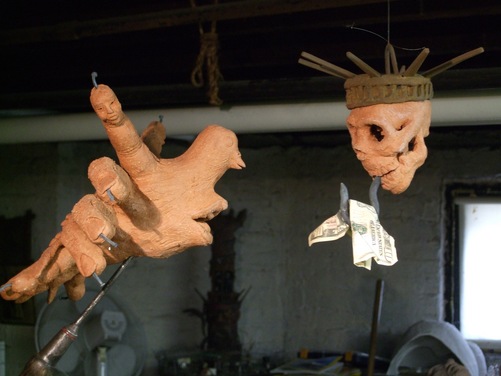 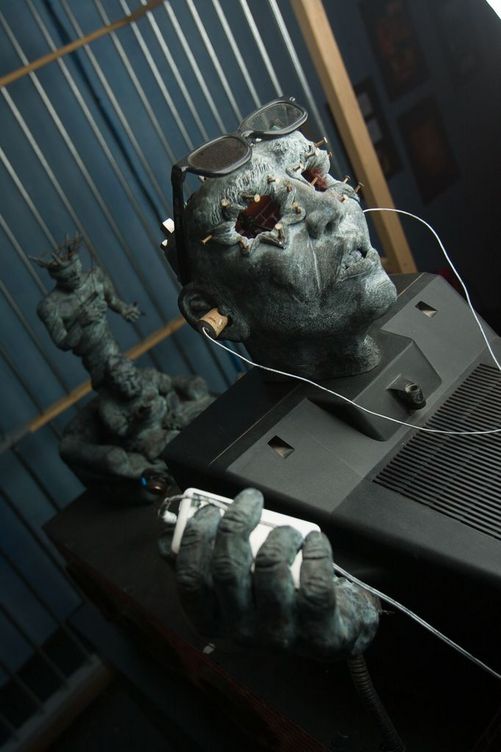 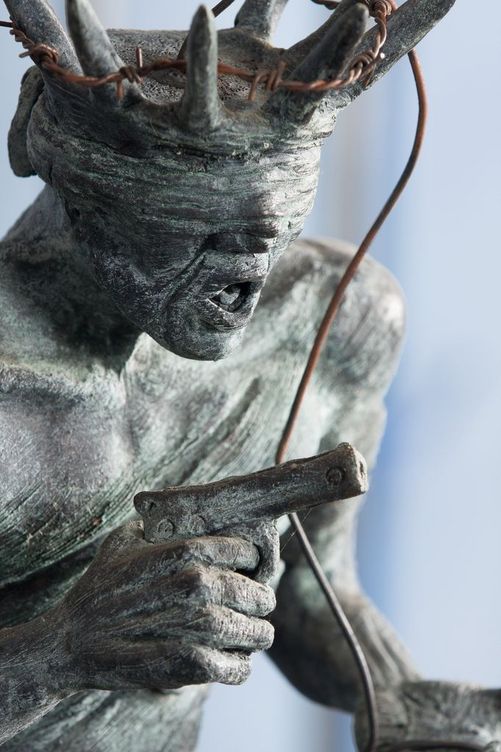 The root of Mary Ellen Croteau’s diverse and often humorous work is her stalwart opposition to patriarchal oppression in all its guises:  as the Church, as militarism, as the wanton pillager of the earth, as the rapist and pornographer, and as the unspoken force that denies a woman her selfhood.

Croteau uses many mediums to make her mischief, from a canning jar of “pickled penises” titled “Men I Have Known,” to a 2.5 meter high self portrait “CLOSE”, painstakingly constructed from discarded plastic bottle caps.  This huge portrait stares out unapologetically at its viewers. Here is an unadorned woman whose gaze denotes both strength and outrage at the patriarchs’ destruction of the planet, using the detritus of culture, building it layer upon layer – a visceral representation of the excesses of consumerism. 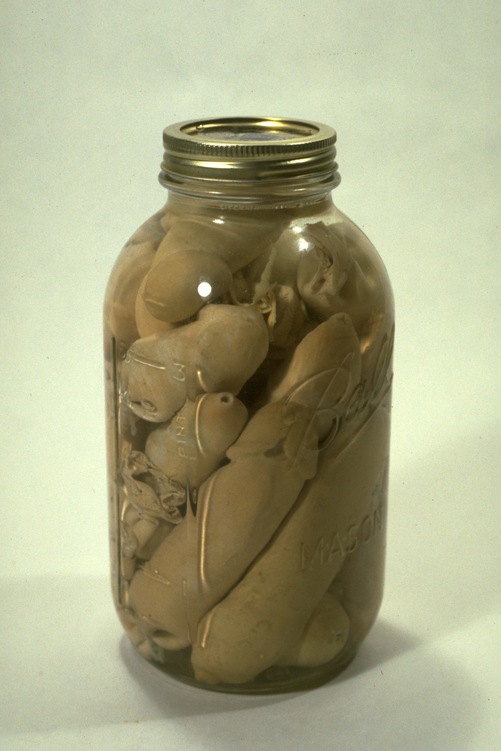 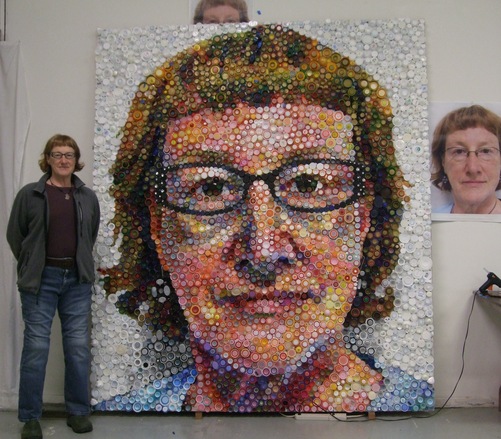 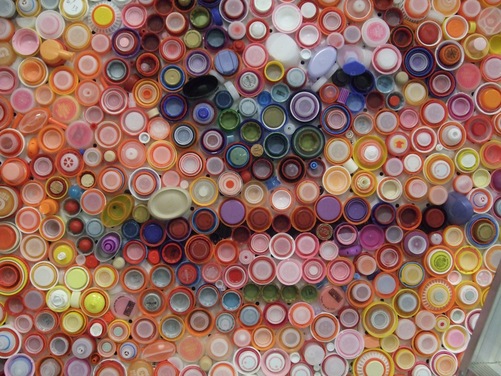 Describing her work as “cultural critique,” her work takes the icons of culture and turns them inside out, exposing their underlying bias and asking the viewer to take another look, to examine the their assumptions and world view more closely. 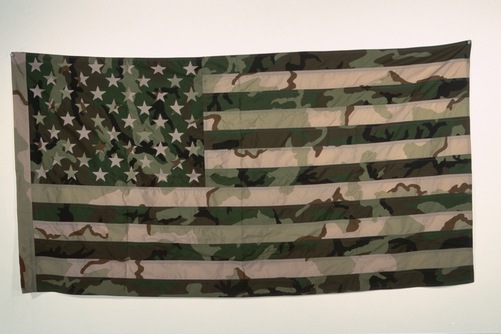 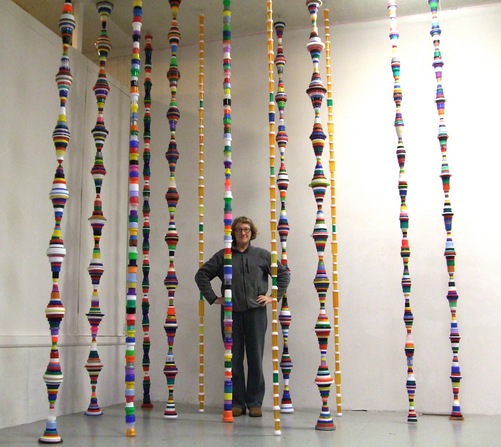 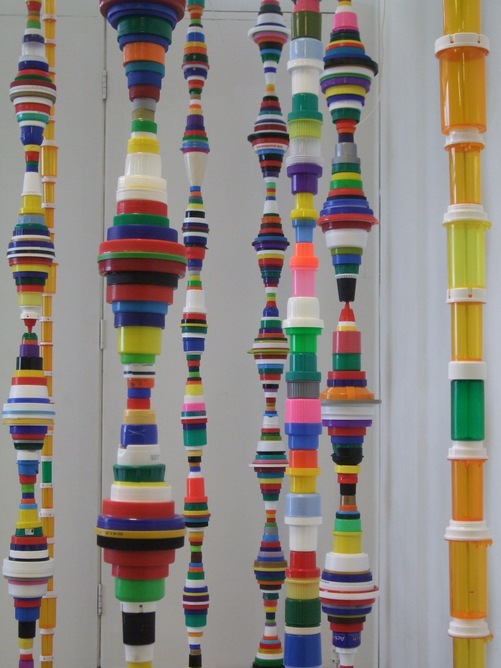 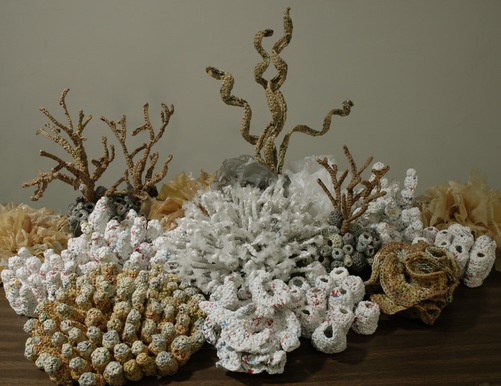 Born 1950 in Chicago, Mary Ellen Croteau received a BFA in sculpture from the University of Illinois in 1990, and an MFA from Rutgers University in 1998.  Her art has been exhibited extensively in the U.S. and abroad, and has won numerous awards.  It has been reviewed in the New York Times, the Village Voice, Chicago Tribune and The Reader among others.  Her work has appeared on the covers of several publications, including Artpaper,  Where Chicago magazine and a book jacket: The Last Taboo: Women and Body Hair (Manchester University Press), and has been reproduced in numerous other publications. It will appear in an upcoming book titled “Wild Art” (Phaidon Press) in Fall 2013.  Recently, her 2.4×2.1m self portrait made of plastic bottle caps, “CLOSE,” went viral on the internet and is now seen worldwide.

Croteau has lectured nationally and internationally, including at the Accademia de Belle Arte in Florence, Italy, The Modern Art Museum of Fort Worth, Texas, and Seoul Women’s University in Korea.  In addition, she has organized, curated and juried numerous exhibitions, including “Attitudes:Good Girls/Bad Women” for Nýlistasafnið/The Living Arts Museum in Reykjavik, Iceland and “Are We There Yet?  40 Years of Feminist Art” at ARC Gallery in Chicago.

Since 2003, Croteau has operated a not-for-profit, artist-run window gallery called Art On Armitage,  bringing fine art into the Chicago streetscape where passers-by can see work by contemporary artists of many disciplines, from many countries.  www.artonarmitage.com