Based between Amsterdam, Warsaw and Moscow this time I wasn’t hesitating about the choice of the artists and the location I should represent. Given a complicated political situation, where Russia plays the crucial role, I feel the urgency to introduce three artists, who actively work to explore, test and provoke the current power structures and social order.

The art of Direct Action is a term brought in by a Russian artist Alexey Knedlyakowski to describe the contemporary cultural phenomena on the border of critical art and activism. It appeals to the pertinency for powerful forces to rise and act from below on a tide of conviction, frustration, concern, passion, refusing to accept current power structures, set orders, the state of things. I believe that in the tense and oppressive environments art events have a potential to evoke alteration, resulting in anything from a backlash to modification to revolution.

Unfortunately this type of art can hardly be discovered in Russia nowadays. It’s been prohibited for exposing in the museums, the websites of these artists are being censored and removed.

I chose the three artists/artist collectives of the few based in Russia, who use experimental platforms to critically express themselves and engage with the wider publics within complex environment of conservative patriarchal society, where censorship and oppressive climate don't allow to openly speak on contradictory themes.

Olga Jitlina is and artist, art critic and a curator based in Saint Petersburg. She is interested in the issues of human rights, along with that of nationalism and neo-nazism in Russia. Her projects employ non-conventional platforms. During her residency in Bishkek Jitlina inaugurated a new progressive political party –Polyandry Party of Kyrgyzstan and presented architectural housing project for Future Love.  As part of her residency Olga also brought to Bishkek her media performance “Week of Silence”, which spins around abortion restriction law adopted in Russia in 2012. This performance got censored by the venue – Russian Drama Theater (which previously agreed to host the show) because the play presents Russian Orthodox Church in “unsightly manner”. Jitlina created a series of publications in   mass-media titled the Agency of Utopian News as a humorous and absurdist attempt to explore the power of political imagination and confusion. The migrant board game Russia, The Land of Opportunity is an attempt to find a way to depict a variety of life-scenarios of the labor migrants coming to Russia from ex-Soviet states. By playing the game one is invited to identify oneself as an immigrant worker and thus think of the complexity of immigration issue from unfamiliar perspective. The player encounters a labyrinth of rules, bureaucratic fences and open hatred towards the aliens. 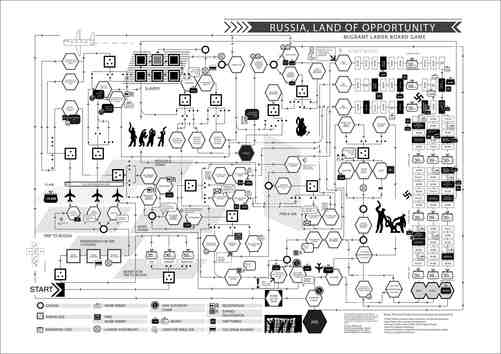 Olga Jitlina, Russia, The Land of Opportunity. The Migrant Labor Board Game, 2011

Art group Babushka posle Pokhoron (Granny after the Funeral) was founded in Novosibirsk by Artem Loskutov and Maria Kiseleva, and recently moved to Moscow. Its main instrument is the humorous approach to political activism and its major aim is to test the borders of the social rules. Annually on the Labor Day (1st May) they have been organizing Monstrations, a marches gathering thousands of young people holding witty written statements in their hands. When Pussy Riot got arrested, Babushka posle Pokhoron has made a poster Icon Pussy Riot and placed it into the empty billboard frames they found in the city. Later they spread T-shirts with the same print. 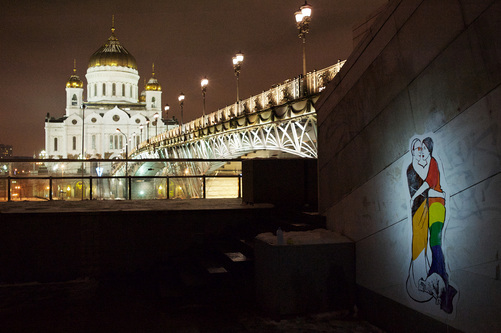 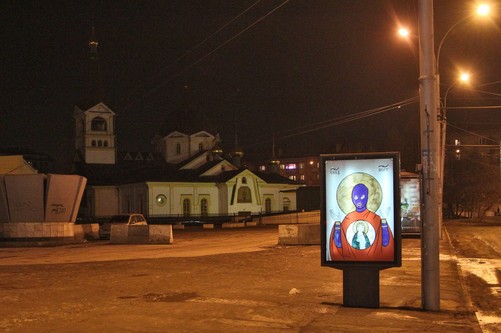 Lusine Djanjan is a visual artist based in Krasnodar, Russia. Her paintings and installations are reflecting the sharpest political critic of contemporary Russia’s politics. "For the political behavior” was the reason given to the artist, when she was fired from the Krasnodar State University of Culture and Arts, where she was tutoring for 10 years. Her political commitment takes shape in such pertinent actions as her project Mordovlag, during which the artist was present on “Tolokno’s Base” (The Base for suppoert of Nadezhda Tolokonnikova) during all the course of its existence: starting from Nadya’s hunger strike till her transfer to Siberia. The posters, created by Djanjan and giant edges of the information ‘cubes’ magnetized the attention of the international press aiming to encourage the spread of the information around the world. 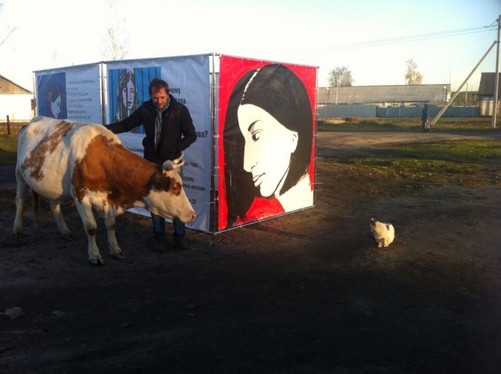 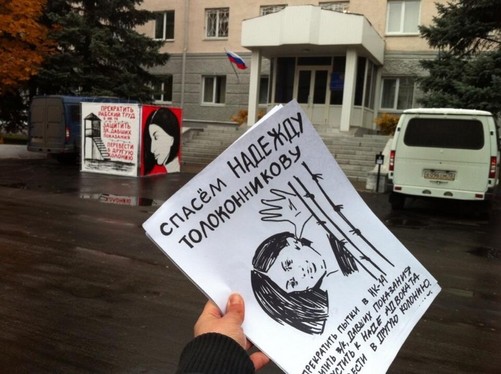 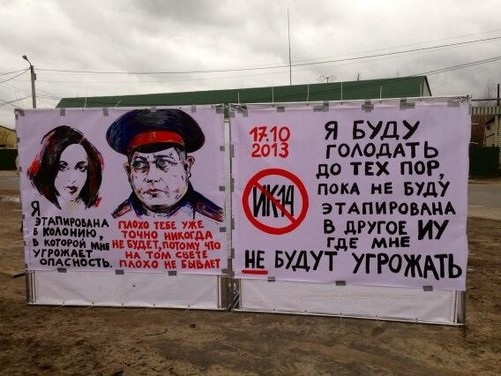 Katia Krupennikova (1982, Moscow, USSR). Lives and works between Amsterdam, Warsaw and Moscow. She graduated from De Appel Curatorial Programme in 2012 and holds MA in History of Art department at the Moscow State University for Humanities. In her work Katia Krupennikova has been investigating how artists comment on social or political contexts. Katia currently collaborates  as a curator with Katarzyna Kozyra Foundation (Warsaw, Festival Komentatorki, October, 2014), which creates visual and discursive platform for collaboration between Russian and Ukranian female activist artists; Center of Contemporary art Ujazdowski Castle (Warsaw) as an Assistant Curator (2013-2014), where she as well contributes as a curator to the programme of the Video screenings, and Performance, bringing to Poland fresh works by such artists as Javier Tellez, Nathaniel Mellors, Keren Cytter; Moscow Design Museum (2012-2014) as an invited curatorial adviser. Her recent independent curatorial projects Playing Nature within the Special Programme of the 5th Moscow Biennale of Contemporary art (CCA Sokol, Moscow, 2013), NO LAND'S MEN (De Punt, Amsterdam, 2013) and My Joy (artgeneve, Geneve, 2014) are devoted to social and economic critique. Katia collaborates with various cultural resources internationally including www.colta.ru (RUS), Metropolis M (NL).