It is common to consider art as inaccessible, or to make it valuable by showing it only in museums and galleries. Many question this perceived elitism and take advantage of abandoned or underutilized buildings, transforming common spaces, forgotten spaces, into areas to see art. The abandoned structures are strangely seductive. These are nostalgic and not at all terrifying places. 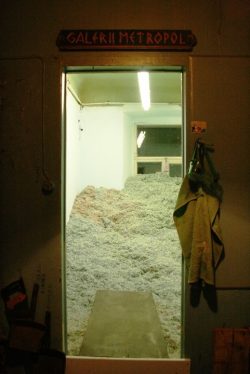 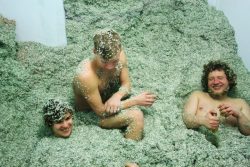 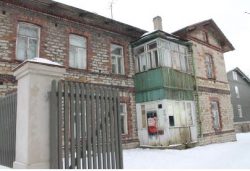 In the district of Kalamaja in Tallinn, artists fascinated and in love in every way, creative and ingenious have transformed an abandoned house, recovering the architecture in ruins to inspire astonishment and give new life to spaces. The inhabitants preserve the wounds of time, create extraordinary configurations and invent new ways of life. The space is used as residences for artists. 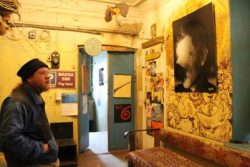 Estonian artist Kaarel Kutas is one of the inhabitants. Young artist, he is interested in everything in the radius of 360 degrees. He is an artist-performer and executes installations. He has also done painting, video-art and prints.

At this time, approximately ten national and international artists have settled there. The kitchen mixes with the bathroom, which in turn can be transformed into a theater stage … The journey continues. 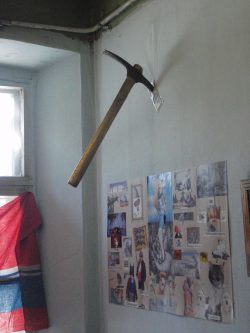 With this tension of transformation, these artists prove once again that art can happen anywhere, that art can make great and beautiful declarations and that art is for everyone.

This is particularly the objective of the community with Circus-Art-Theater sacrificing the paradigms of art and modern culture. This group of clowns uses grotesque accessories to represent life in all its rarity. Art mixes with elements of theater and circus.

On the top floor of this house is the Metropol art gallery, better known as 6m2. The unconventional art gives appointment to the amateurs of contemporary art. 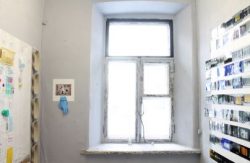 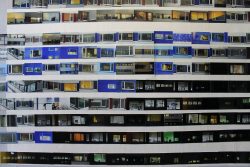 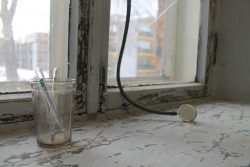 The last exhibition deals with the work of Estonian artist Triinu Jürves. Through photos, videos and sound, she immerses herself in an intimate experience, that of her hospitalization. This work talks about rituals, the corporal border between the private and the public.

Many spaces such as the Metropol Gallery exist in Tallinn and in other cities around the world. The contemporary ruin is celebrated today as a lyric figure of chaos. The damaged, abandoned or destroyed house has an aesthetic appeal at the same time that gives way to an inexorable fascination. 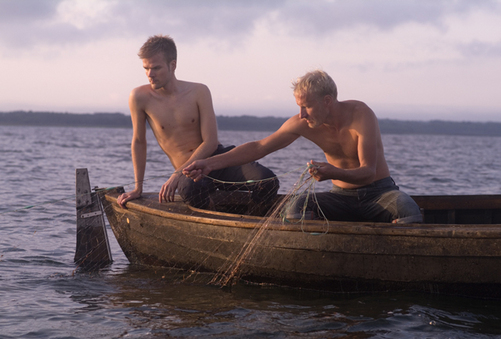 For the Alternative Art Guide I propose three young artists who best represent what Estonian contemporary art is about in 2013. All three artists work with installation in most different ways. Their work stands out in Estonian contemporary art field for extraordinary visual poetics and games, and for imagining alternative ways of approaching issues of everyday life and politics. All these artists are more or less concerned with the dialectics of post-Soviet and Western world by proposing visual imaginaries of one or the other. However, their biggest strength is in imagining realities that are neither nostalgic nor futuristic but are looking for ways to describe contemporary state.

Jaanus Samma has worked with the topic of hidden gay histories in Soviet Estonia, with queer aesthetics and subculture. He always works in various media at the time. His recent work involves a booklet with DVD video-compilation Applied Arts For a Gay Club (2010), which focuses on the gay club culture in Eastern Europe and suggests starting rural gay clubs in Estonian countryside barns for which the videos of hard-working men who sickle the lawn, saw a log, milk the cow etc. In addition to that he has started making sweaters with patterns of Estonian streetart with allusions to sexuality. He has found the graffities, located them, made them into patterns and let other people to knit these for him. There are only four sweaters available yet, but the project is still in progress.

His most recent work is called Chairman and it tells a story of a notorious gay cruiser who lived in Soviet Estonia, was caught by the authorities and prisoned for three years for having gay sex. Samma tells the story through fragmented opera which consists of a series of pictures from the fictive opera, an audio piece that tells the plot of the opera and a neat opera lodge where the music of the opera plays and you have a view into the void. Together with this work was presented an older audio collection of anonymous interviews with Estonian gay men telling stories of gay subculture in the 1970s-80s called Stories (2011). For this exposition Jaanus Samma won the grand prix and audience prize of Köler Prize 2013. 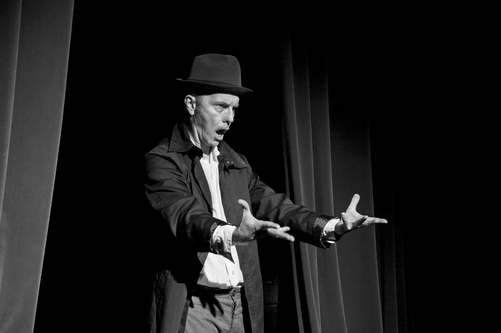 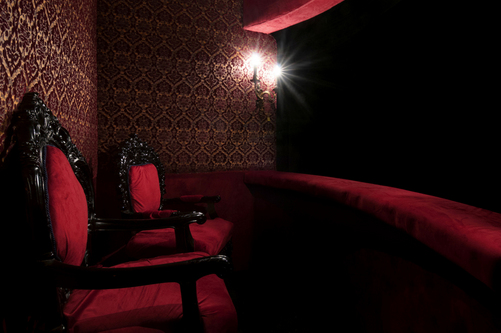 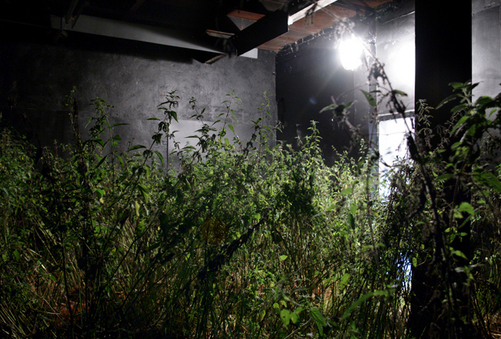 Merike Estna is a painter and an installation artist. She started with interdisciplinary arts and has moved on to painting. She has developed her very own painting practice for over ten years by now and is again moving back to video and installation media combined with painting. Her early paintings are depicting collages of commercials with nude portraits and various other objects creating rather uncanny atmospheres. From the uncanny nudes she moved on to progressively abstract painting. First, she tried completely abstract nature and sea paintings with sometimes nearly obscene sex scenes. After that she first moved on to pornographic nudes and then to a completely abstract painting dealing with colors and rhythm. However, her most recent work has become completely abstract without depicting anything specific by being specific itself.

When she found her painterly language, she started to build installations that radically widen the medium of painting and abstract installations. From then on she has moved on to take the paintings to the nature and film video performances with the paintings in the English landscapes creating situation that instead of earlier uncanny rather amusing and eye-opening. Suddenly painting does not seem to be a modernist medium with no options of development but instead it has become a field to be rethought and to explore further. 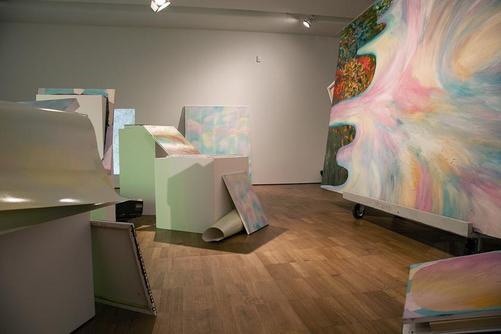 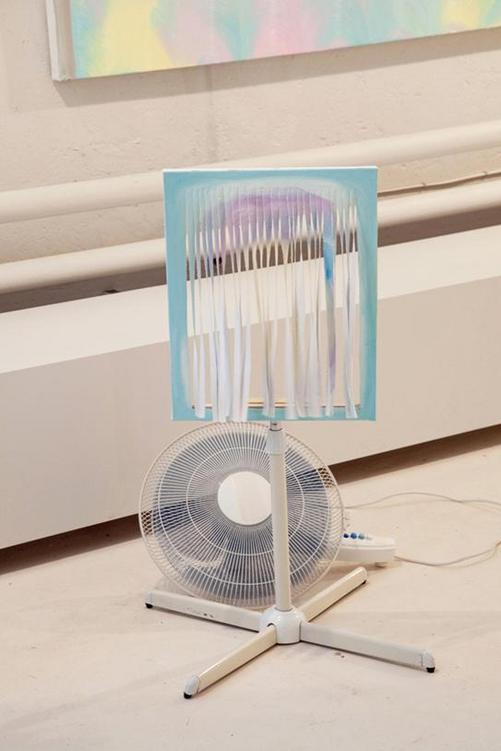 Merike Estna. A ventilating paiting, olin on canvas and a fan, 2012 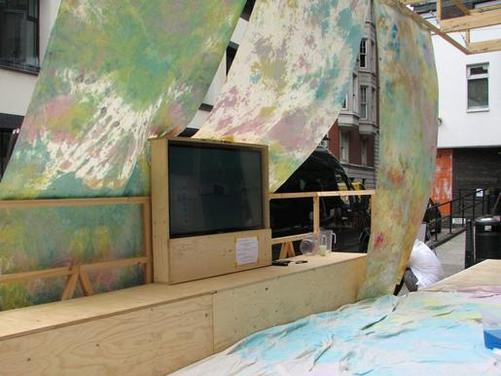 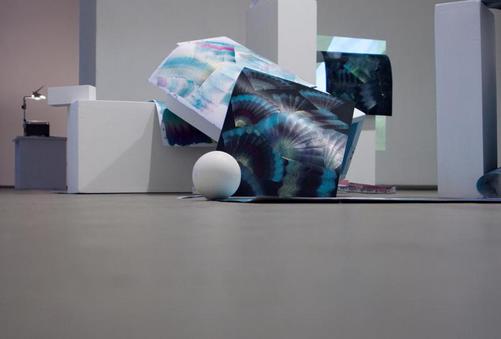 Flo Kasearu has worked with the issues of Estonian nationalism, problems among Estonian art scene and unemployment, while she has also done various interventions in public space. Her most recent work is Flo Kasearu House Museum (FKM). Flo Kasearu is a young artist who inherited a wooden house of four flats in North-Tallinn, a gentrifying area in Tallinn. The house was in a rather bad shape in the beginning when she got it. Despite being a very prolific artist, Flo would not have a chance to retrospect in a museum for number of years because of her age. At the same time quite a number of dead artists have their homes made into museums.  On the other hand, FKM is continuing the topic started with video piece Creative Estonia (2012) which is partly a hommage to Jaan Toomik’s installation Menu (1993/2012), and is proposing a comment on what the state politics expect from art – a beautiful packaging of poverty in order to pretend Estonia is not poor Eastern European post-Soviet country but is part of the West. However, FKM is presenting the living conditions of an artist living in a gentrified area, having nightmares of what can happen to the wooden house, which only partly has running water and probably needs extra heat insulations which is hardly affordable. A freelance artist can not just go and take a loan to repair the house as she does not have a regular income that would make her a trustworthy client to the bank. At the same time, the museum is highly amusing and fits perfectly for showing her works. In addition to most of her video works, there are also special installations for the museum, e.g. a webcam that takes a photo of each guest looking out from the roof window. There is a museum bar as is common in every contemporary museum. There are golden busts of the artist that secure her place in the fictive canon of art history – if there is already a bust made of her, she must be important! In a nutshell, FKM gives an opportunity to the visitor to see how artists live, where is Estonian contemporary art coming from and maybe explain why is Estonian contemporary art often so socio-critical. 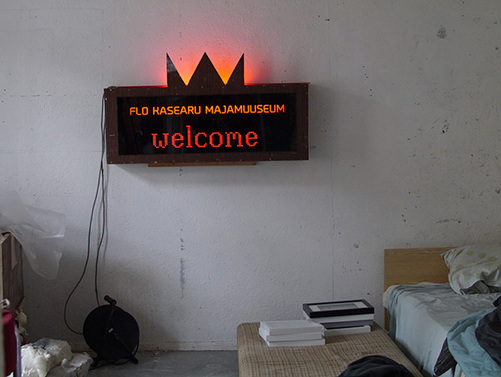 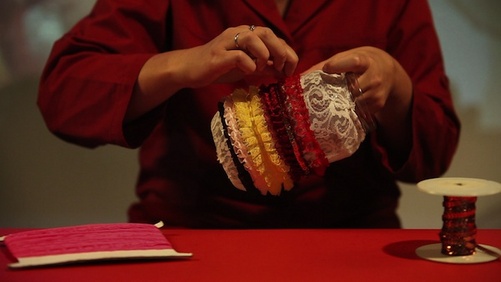 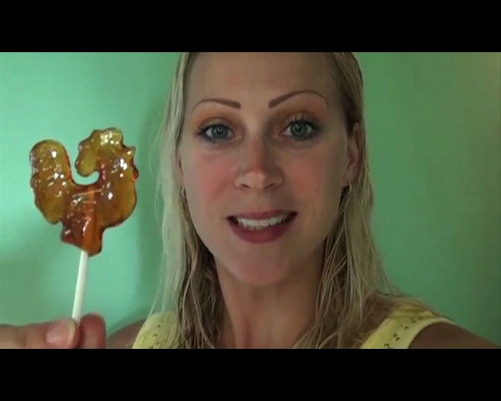 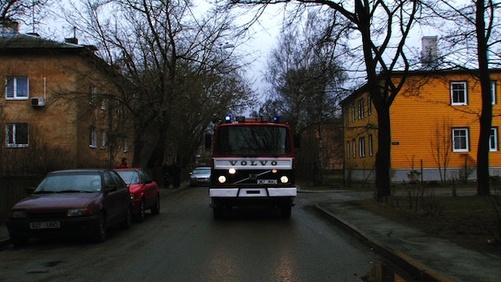 Rebeka Põldsam works as a curator-project manager at Center for Contemporary Arts, Estonia. She occasionally writes art criticism. Her main interests are aesthetics, queer theory, and philosophy of subjectivity in Eastern Europe.