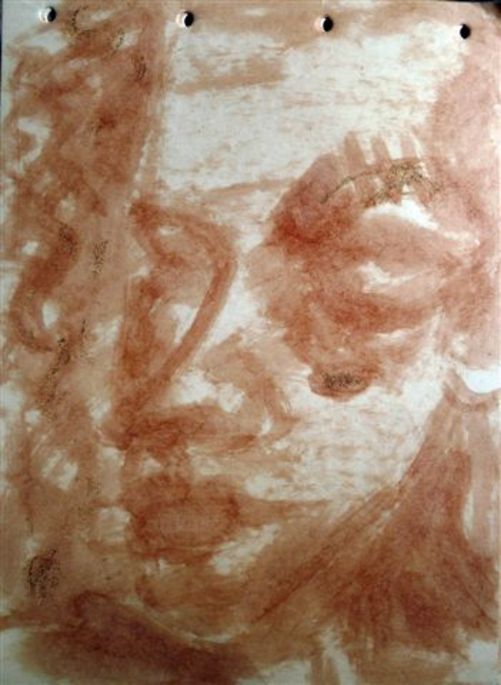 I am interested in works and projects that allude to the human being inserted within a social pseudo communist system based on twist dual moral attitudes and how this influences the personality from an individual or a family to a social group. Views, attitudes, vices defects, virtues, footprints, etc. Acts that from an introspective point of view call the multitude and from an apparently local beginning they get involved in systemic infrastructures that look alike within the occidental society. I take the art like a Laboratory; the “Espacio Aglutinador” has been, in fact, that one, always for an elegant and good taste art instead of a conventional place. In this laboratory I am my own experiment. At this laboratory I same I am my own experiment and poking around between my mental currents I organize a parliament for a project or an act that take body/ object intends to establish a specific and almost therapeutic communication. The plastic arts are very much distant from being absolutely social, never like the music, never like the sports.

Giselle Victoria tries to get close to her body and at the same time taking distance, place her excreta like trophies or magic elements for an auto-identification and at the same time assimilation. Reveal a female identity tackling the moral-social repressions established historic and hysterically. Also reveal, indecently, her conflicts with her family relationship and her own social entity. Split her personality and invite the public to fiddle with your garments and sanitary personal objects. She give them like the most valued jewel, legitimate, the one that authenticates her own existence, hence, generates a discord between the people that do not assume the idea that a real beautiful object is not that diamond collar that unemotionally is put in a shopwindow but is that one that contains life, energy, fluids or remains of human presence.

Giselle Victoria, My Mother, Drawing with the artist’s blood. 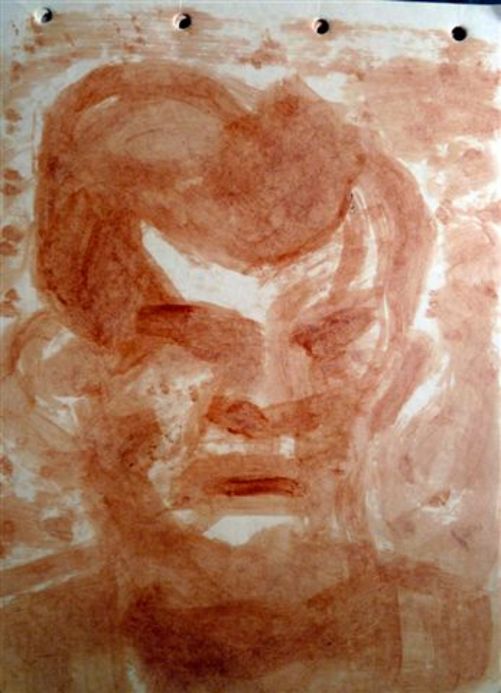 Giselle Victoria, My Father, Drawing with the artist’s blood. 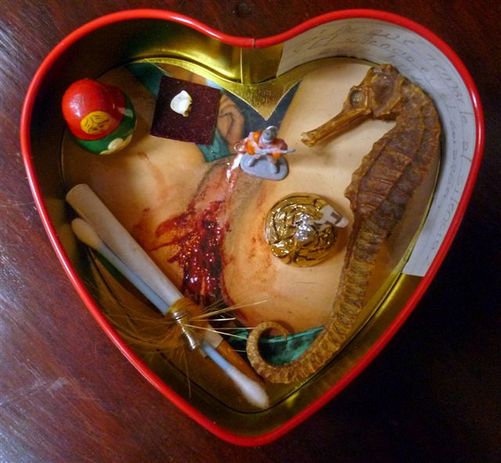 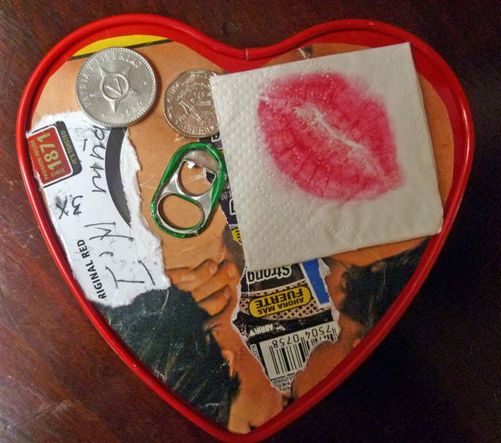 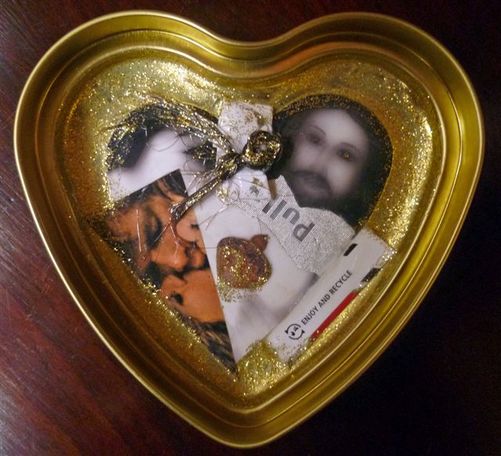 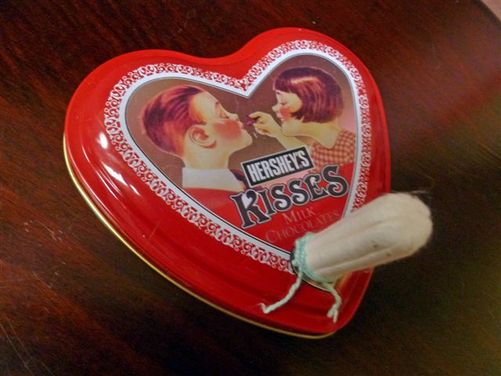 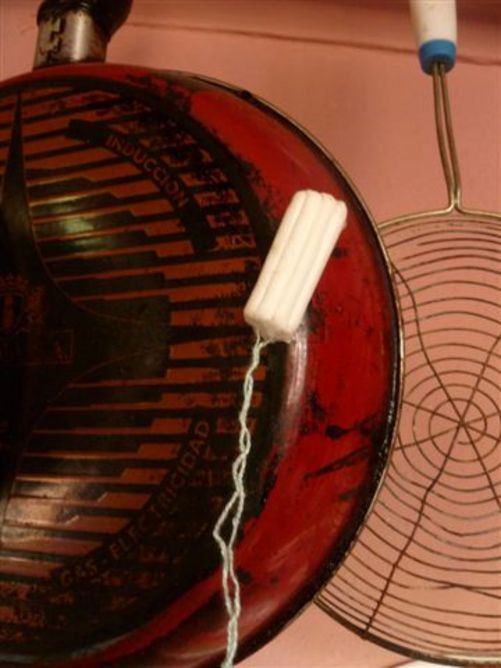 Marta María Pérez investigate about the presence not tangible: the other dimension. The unlikely, the doubts, the mysteries and the questions without answers during centuries have tortured many generations of human beings. Play with the image as a proof and like convincing form, but put in cloth of judgment what we see seem real. The trick of the real image is similar to the unconscious trick that activate and unbridled force us to see what we desire. The activism of the “SELF” goes ahead to the facts and focus more deep in our needs and unconscious requests. Here is where Marta uses her mystic power and takes it to the maximum potency to be delivered to hysterical believing, necessarily believing, crowds. Since each man is a little unconscious philosophic, each one gets into the spiritual faith that substitutes and answers arbitrarily those same questions centuries ago. 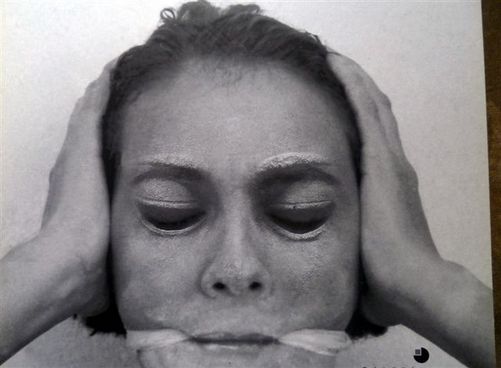 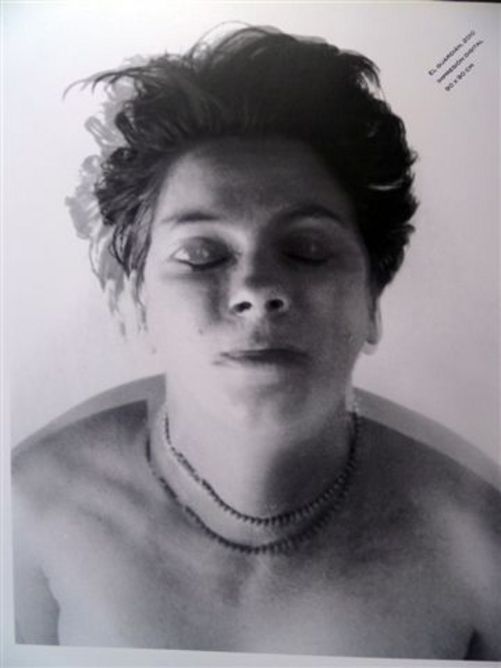 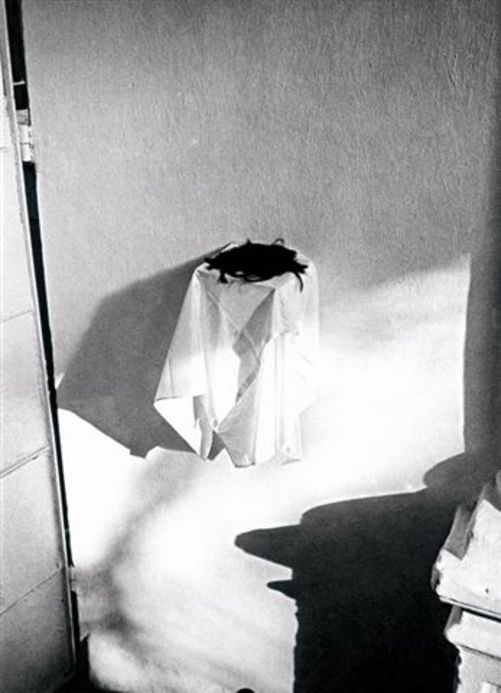 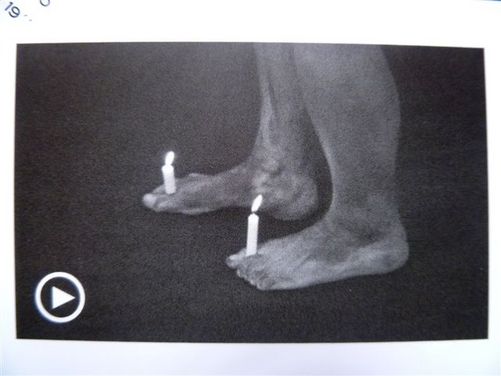 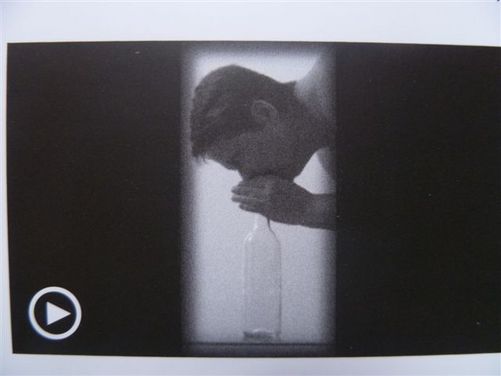 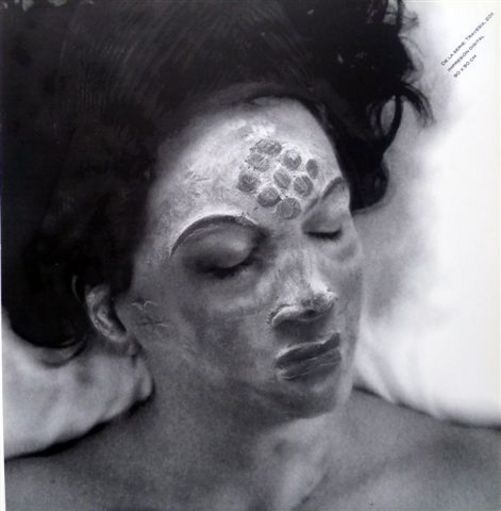 My work is based on the manipulation of the imperfection and the human fragility. I am an example of my own work, manipulating my own vices and immoderations. I take a tracking of the fanatical attitudes, obsessive and lascivious person. I take my own experience and I perform on my own life. I write the Fidel’ speeches in restrooms walls, furniture, drawings, paints and objects, decorate the surroundings with his texts like an infallible absorbed fanatic and numb for the idol and take photos about him in all of the moments I can. His vast appropriation of brains, do not succumb never and brains are tied to his own devotion by the politic implacable and apparently immortal idol. My work describes of a disproportionate and symbolic way this devastating fact that is: “Masses’ psychology”. 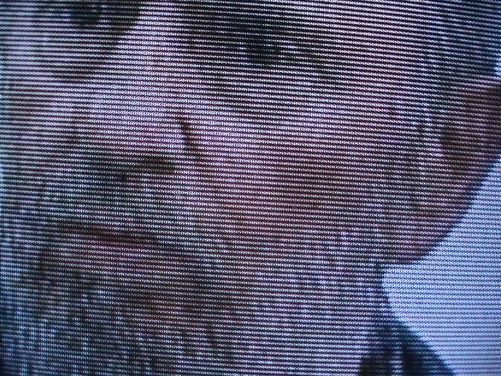 Sandra Ceballos, You will be my baby, animation with pictures taken from TV. 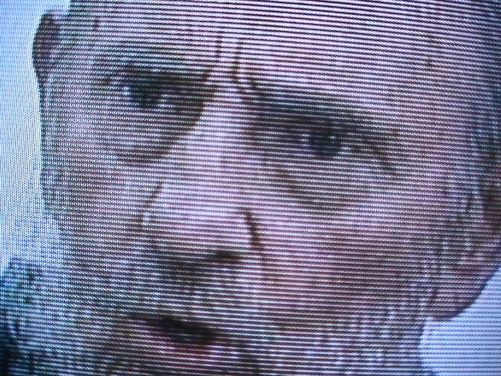 Sandra Ceballos, You will be my baby, animation with pictures taken from TV. 1

Sandra Ceballos, You will be my baby, animation with pictures taken from TV. 2 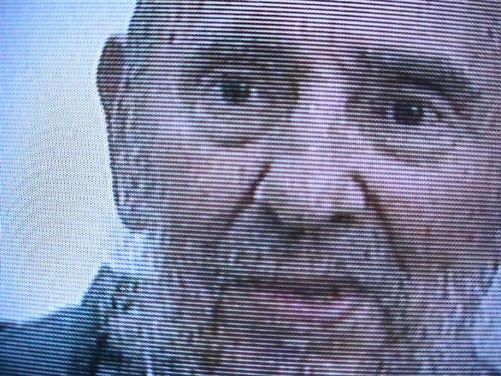 Sandra Ceballos, You will be my baby, animation with pictures taken from TV. 3 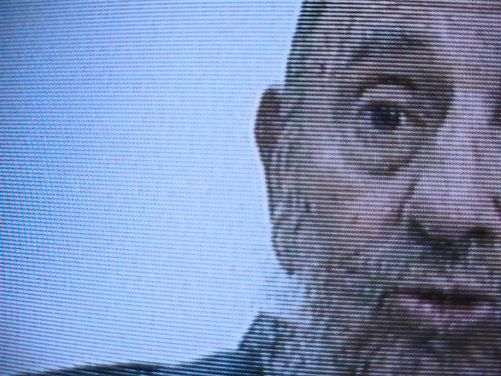 Sandra Ceballos, You will be my baby, animation with pictures taken from TV. 4 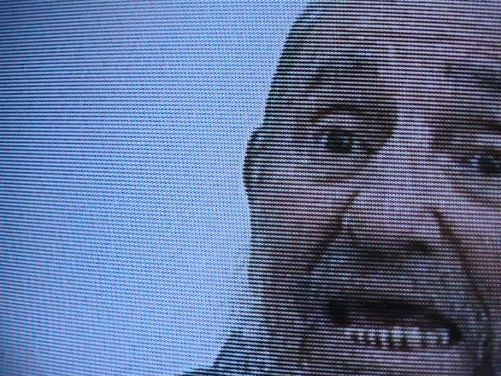 Sandra Ceballos, You will be my baby, animation with pictures taken from TV. 5 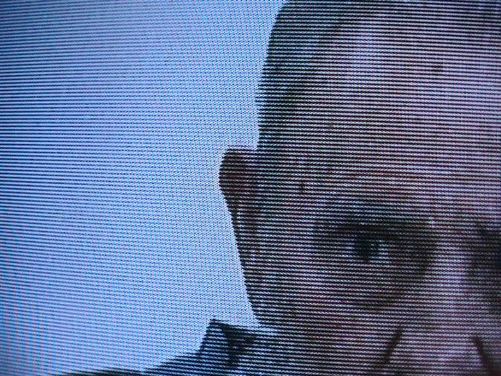 Sandra Ceballos, You will be my baby, animation with pictures taken from TV. 6

Sandra Ceballos graduated at the Plastic Arts Academy “San Alejandro”, Havana in 1983. Within the Visual Arts has realized performances, photos, paints, drawings, installation and videos. Her works are a part of the Collection of the National Museum of Fine Arts of Cuba; The Contemporary Arts Museum “Michoacano” of Morelia in Mexico; The Latin American Photography’s Collection of the Lehigh University Art Galleries (Gallery Track 16) in Pennsylvania, USA; The Bergamon Station, Los Angeles, USA; The Ninart Gallery, DF Mexico; The Museum Small Cart Gil, Mexico; The Shelley and Donald Rubin Abstain Collection, New York; The Center for Cubans Studies, New York and The Howard Farber Fund Collection, N.Y. In 1994 founded at her own residence, along with the artist Ezequiel Suárez, “Espacio Aglutinador”, an independence space for art events. Has been co-curator for as been curator for signs in New York’s Drawing Center, Royal Collage of London and Espacio Aglutinador.

“Espacio Aglutinador” was created in 1994 in Havana, Cuba. I can assure that this place emerged accidentally and not as something calculated and scrupulously organized, neither manufactured envelope a theoretic expert base neither tediously searched painstakingly. “Espacio Aglutinador” is not a conventional gallery, is the house of Sandra Ceballos, a Cuban plastic artist’s, who, besides her personal work, carries out, at a good rate, the cultural activities of the above-mentioned place. At the beginning of the 90’s, there was the emergency need for a cultural space in Cuba where performance courageous curatorial works and less discriminatory curatorials to be at the margin censure.

It was necessary to have a place far away of limits and academic taxes established at official levels, such as, only promotions of well-known artists or graduates from ISA (The Cuban Art University) or young people artists with strong connections with Cuban official organizations. The need of a place with no art judgment due to personality or attitude of the creators and get rid of taboos of let the Cuban exile exhibit their art in Cuba. A space clean of bureaucratic mechanisms and conservative views to the artists and engaged with extra-artistic concerns. In general, a simple space for the creation and recycling of good art. “Espacio Aglutinador” has performed more than 100 exhibitions and shown several artists’ works, from Cuban residents and exile ones, also well-known foreigner artists and novel creators. Also it carried out performances, lectures, musical concerts, literary readings, conferences, etc. Important artists of international circuit of Arts have also demonstrated their works at “Espacio Aglutinador” like: Ana Mendieta (Cuban-American), Ross BleKner (USA), Jack Pierson (USA), Tsivi Gueva (Israel), Ernesto Pujol (Cuban-American) Carlos Garaicoa (Cuba), Antonia Eiriz (Cuba), René Portocarrero (Cuba), José Bedia, Carlos José Alfonso (Cuban-American), Tania Bruguera, Coco Fusco, etc.

In order to confirm our ideas, from the very beginning, it was published at the reverse of the catalogs the following text: “AGLUTINADOR” proposes showing up and to spread out artists’ work form all the sects – alive or death people, Cuban residents or not, young or old people, well-known or not, forgotten, modest, despicable – always if they have unquestionable quality but most of all the necessary dose of honesty and uneasiness in front of the own creation of the true art. “Aglutinador” is a cultural space, not a boutique. It doesn’t pretend to be elitist neither avant-garde, neither populist but a fair project. It is not a beautiful idea in a piece of paper written by a highly organized mind “Aglutinador”, it is a real fact happening: fast and naturally. The changes of failure are infinites. If there is something what “Aglutinador”

If there is something to what Aglutinador escapes like mange is the coherence, that bore and nauseating goodness of conscience.

“Aglutinador” says: What a lucid man!