Sofia’s artistic scene is flourishing, with a wave of creativity bringing positivity and ambition to a once-stagnant scene. It has been noted a series of independent spaces open to all and part of an increasingly active subculture. 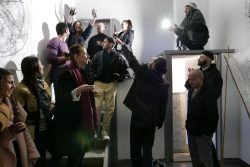 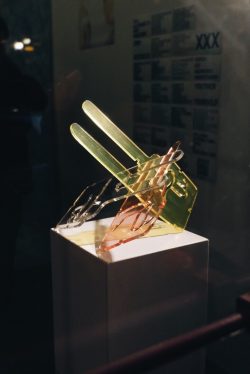 Local artists connect to the country’s “raw and dark” history to create unique alternative experiences in Sofia. In 2016, the artist Voin De Voin opens the doors of an independent cultural space, Aether Art Space. Its goal is to offer a place of experimentation and criticism of contemporaneity. The approach of the space is changing according to the different needs, the mood, the state of mind and the personal desires. ” 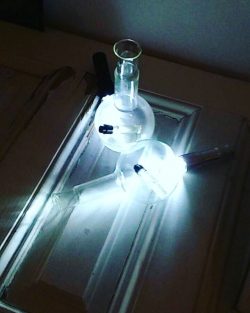 From us to you, perfumes created by artists visual diaries

At the heart of the project, there is the wish to place a landmark on the artistic map of Sofia. It seems necessary for Voin De Voin to connect and extend the idea of ​​artistic creation and especially to find a way to connect art to life and to integrate a way of thinking and perceiving the world.  As Voin De Voin says: the local art scene is strong, clear, often critical and linked to tradition, in the sense of a meticulous use of different mediums. Unfortunately, the younger generation is following the hierarchical steps imposed by the institutions.

Essentially, Æther aims to connect scenes, places and artistic practices to create a space for dialogue including two programs. 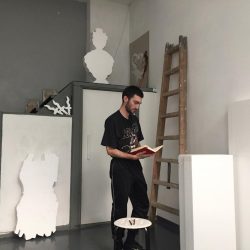 – Part of Æther is an “immaterial project” , which highlights the importance of the creations produced, their motivations and their origins. It offers the visitor a view of more complex processes.

– Another part of the space “Physical Aether” , where thematic proposals form a collection displayed and sold. The wish is to add a mark to the cultural landscape of Sofia; a place where people can discover, become familiar with and engage in the proposed topics and create new memories, not necessarily to preserve, but to further question the present. 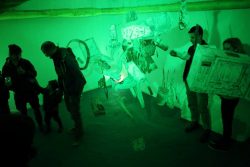 The space started small-scale events called “Sofia art weekend”. During a weekend, two art spaces in Sofia – Aether and Swimming Pool invited the public to attend an exhibition and events. They intend to develop it over the next few years.

Last year, “Aether was invited to participate in a very interesting initiative of the German organization Kunstgebaeude Stuttgart engaging the art scene and the independent European institutions to look into the future of the very interesting experiences and proposals leading to the production and the dissemination of new constructive models of operation in relation to the European economic and cultural landscape 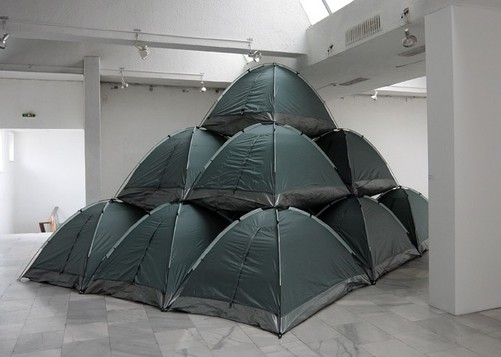 KOLEKTIF is a platform for contemporary art and design founded in 2009 by Teodora Kotseva (art manager), Rossi Sotirova (artist) and Nikoleta Tashkova (designer). KOLEKTIF dedicates its program to showcasing artists internationally. Main goal is to broaden the exhibition opportunities for talented artists and contribute to the promotion and presentation of their work. The organization functions without a physical base, since the three founding members operate from different countries, namely the Netherlands, Italy and Bulgaria. KOLEKTIF seeks to facilitate a dialogue with a diverse public, through network of contacts and collaborations on various occasions.

For the Naked she has chosen artists who are active both on the local art scene and abroad. In Bulgaria most of the artists work without formal affiliations since the gallery sector is rather small and fragmented, and there are scarcely any art initiatives and collectives operating on permanent basis. The artists presented at The Naked represent distinctive styles and different artistic quests, nevertheless they can offer only a limited view over the current practices on the local contemporary art scene.

Vikenti Komitski brings his wit artistic commentary on objects, installations and ready-mades. His acts are minimal in expression and yet exuberant in saying. His work is characterized by thin humor sometimes bordering cynicism and parody. In a playful manner Komitski comments on various aspects of our life, both personal and socio-political. The art works he creates are characterized by subtle and intelligent humor, which touches the viewer in very direct and insightful manner. Deliberately he chooses to work with existing objects, twisting their situational reference. Comment and artistic intervention leave a trace, which is always recognizable in his style.

In his work ‘Monument of Missed Opportunities’ Komitski displaced a street sign and put it on the ground. The sign does not point anymore at the right direction, it does not direct, instead it now exists in a different context, and it points to nowhere. ‘WEST’ is another work that has been subverted to the laws of the artist. Instead of the four principal directions we commonly associate with a compass, now we read one and only direction. If it is not the sign or the compass, then it is the artist himself who shows the direction, as seen in the video work called ‘Permanent’, where Vikenti tattoos an arrow on his finger. This work echoes the statement of Marcel Duchamp who argues that the artist is not the hand, which creates, but the finger that shows. In the EAST of BEST exhibition catalogue author Viktoria Draganova argues that the ironical taking of Duchamp’s words is a ‘permanent subjection to the legacies of Western art theory, where Duchamp plays a key role, or even an aesthetic subversion to those rules’.

‘Who wants to live forever?’ (2010), polyester tents, 4.50 x 6.60 x 3.15 m
‘Pyraminds are dwellings for eternal residence and tents – for transitory….the tent could be seen as a symbol of life, assuming that life, in a more general sense, is a transitory experience’ 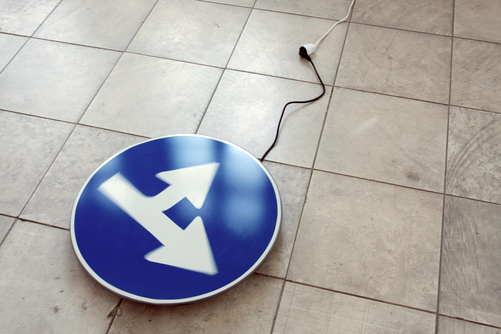 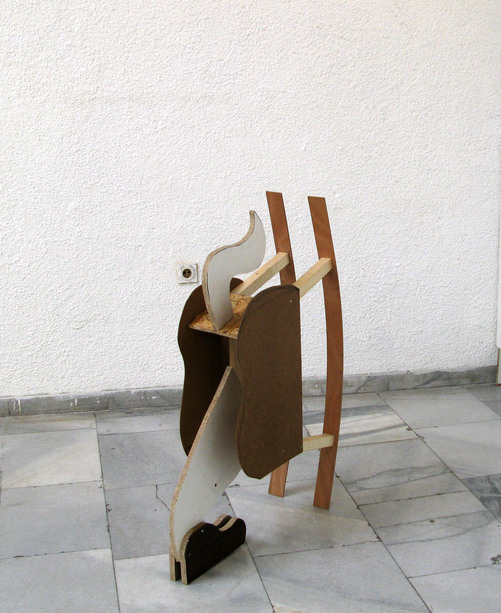 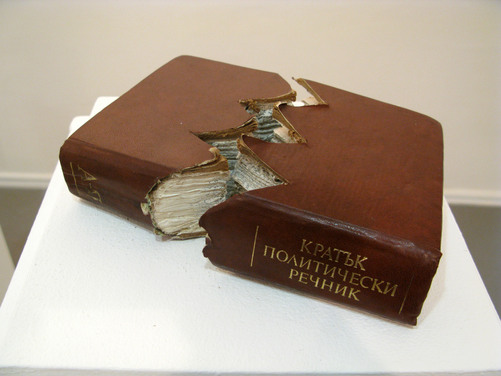 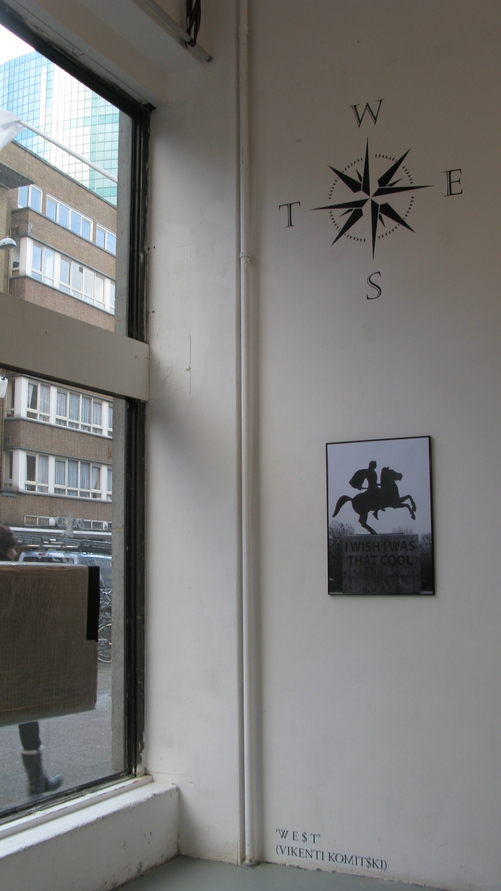 ‘WEST ’and ‘I Wish I Was That Cool’ (2012), exhibition view EAST of BEST, Roodkapje Gallery, Rotterdam 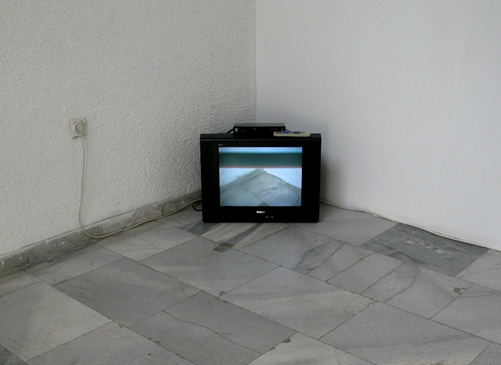 ‘Sometimes From a Different Angle Things Look Quite the Same’, (2008), 2 min video loop, TV set, architecture-video footage of a gallery corner is projected in the opposite one. 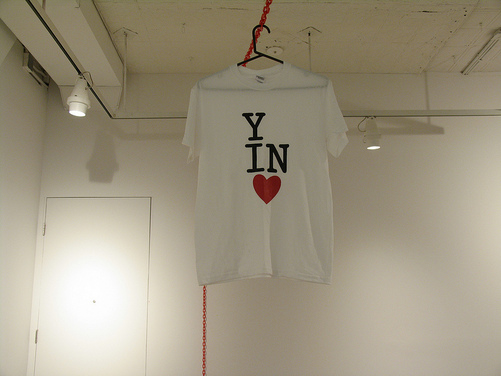 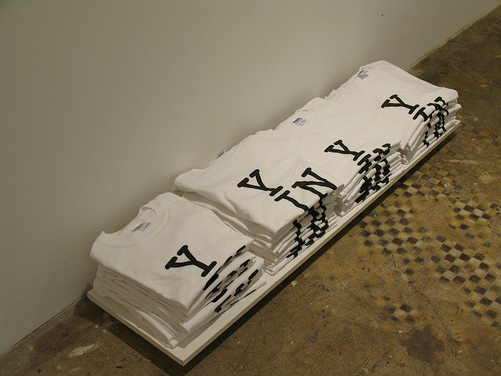 This project was first shown in NUTURE Art gallery, Brooklyn NY, as part of the ‘Is it free..?’ exhibition, where visitors were invited to take free t-shirts. The following text fragment has accompanied the work:

‘…Love is thus not only an ontological motor, which produces the common and consolidates it in society, but also an open field of battle. When we think of the power of love, we need constantly to keep in mind that there are no guarantees; there is nothing automatic about its functioning and results. Love can go bad, blocking and destroying the process. The struggle to combat evil thus involves a training or education in love’.

Kiril Kuzmanov’s approach to art making is based on deep research, both personal and topical. In his work the artist deals with artistic processes and experiences, transformed into actions related to particular space, situation or a person. According to Kiril the art practice is an occasion to represent oneself in a field, in which the opportunity for self-positioning in a specific dimension or situation becomes visible. To that end he distances himself from the works he creates, questioning or even ironizing his own artistic position.

Kiril employs different artistic measures ranging from moving images, objects, sculptures and installations. He admits that the objects he creates are associated with the provocation of certain actions, where the object becomes ‘an acting object’. Most of his installations are site-specific and contextual, where ‘the specificity of the space they interact with or construct, is a possible field for the objects’ action. In this field the spectator is placed in a situation of constant ‘subjective’ communication with the object, which in itself becomes a reason for the object’s action’

Video
‘Jing, Jing, Jing’ (2008-2010) is a part of the on-going research project- ‘Wild is the Wind’, which started back in 2008. This project consisted of eleven months of travel mostly by land throughout Asia (Turkey, Kyrgyz Republic, Republic of Kazakhstan, Russian Federation, Altai Republic, Mongolia, China, Tibet, Nepal, Kingdom Lo Mantang, India, Kashmir) and over 2000 km trekking and climbing in Tian Shan, Altai, Mt. Genyen in West Sichuan, Tibet, Nepal Himalaya, and Kashmir.  With this journey the artist explored the most untamable sites of Asia. Kuzmanov collected photo, video, audio and text documentation, which served as a basis for his fellow research. ‘Jing, Jing, Jing’ brings us in contact with the almost meditative play of two kids, a small window to another world, through the sneak view of a stranger. 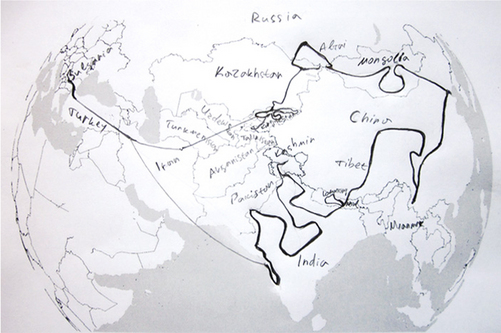 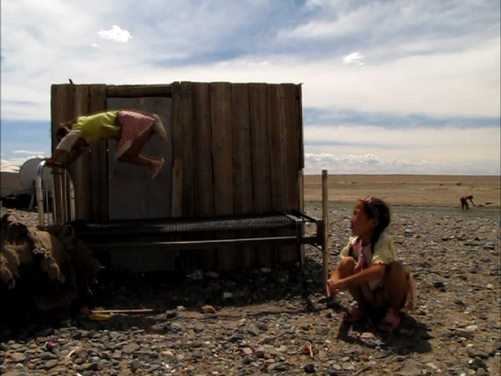 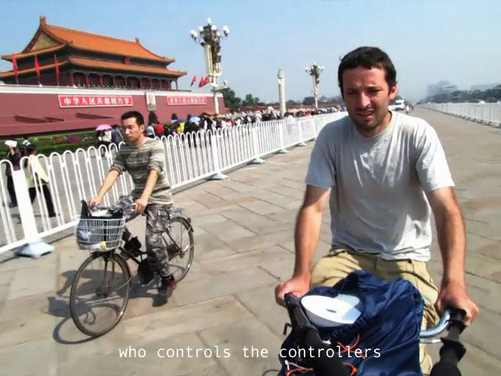 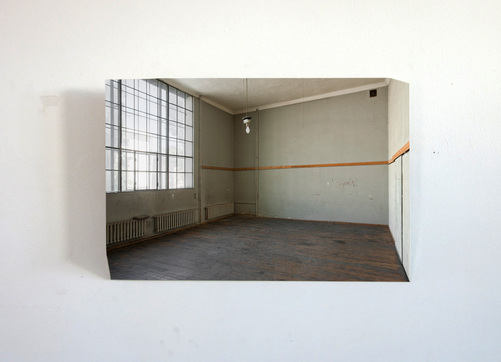 3/7/4 is a documentary work created for the end exam in the National Fine Arts Academy in Sofia. Graduating in Sculpture, Kiril has deliberately decided to present a non-sculptural work: a poem written with a water-soaked sponge on the dusty floor of the atelier. The artwork is an act of ephemeral being, the poem evaporated and dissolved in time, living a trace in the collective memory of the public. The documentary fragments play the role of a narrative created in a twisted perspective, which brings the viewer in contact with a disturbed visual setting.

‘Whereas concept artists in the 70s were ‘writing down’ their concepts into legal contracts and thus materializing it, Kiril Kuzmanv creates an aesthetic documentation- a further ‘expression in space using material’, as Stanislav Pamukchiev describes the original work’ (Viktoria Draganova in exhibition catalogue EAST of BEST). 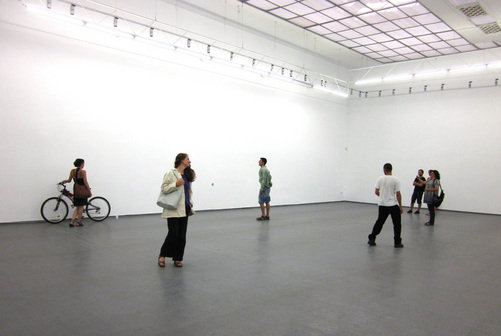 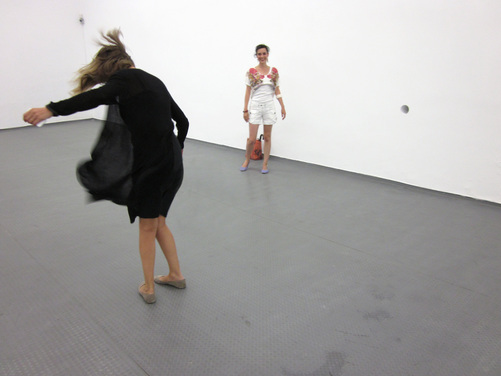 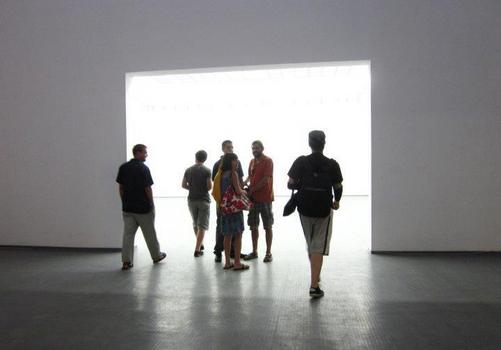 ‘EXHALE’ (2008-2011) site-specific work
Raiko Aleksiev Gallery, Sofia Bulgaria
A centrifugal fan, which injects air stream with 250 km/h in the empty gallery space through a hole in the wall

Link to video from the exhibition:
http://kirilkuzmanov.com/works/exhale

Samuil Stoyanov is a multidisciplinary artist and social activist, working with various media. On occasion of the acceptance of Bulgaria in the EU in 2007 he created the work ‘How do you see Bulgaria?’ an intervention to eye chart used by optometrists to diagnose patients. By substituting the ‘classical’ symbols with a twisted map of Bulgaria, he intended to test the visual comprehension of the audience. The map of the country has been subjected to a mere form, an object, devoured of meaning. According to critic Daniela Radeva this action was initiated in order to test the viewer’s perception, whether it will be navigated towards the notion of the state of Bulgaria, or it will stay as a reminder of a piece from the world. She admits that in this work the thinking process is modeled by the visual action itself. 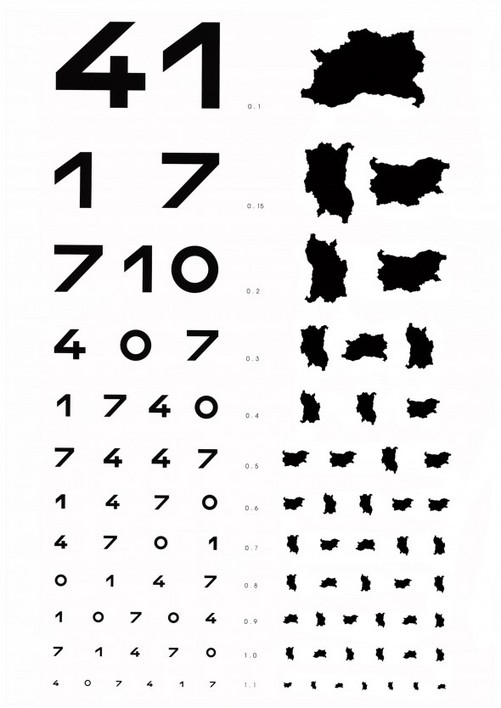 Samuil Stoyanov directly ‘communicates’ with the public with interventions into the public domain. In 2011 he made an installation with 40 garbage bags, which covered the street lamps on the main square of his hometown Dobrich. This project was part of cycle of urban interventions, which the artist undertook in the framework of his participation in the international art project ‘The Art of Urban Intervention’. He took part at the section organized by the Institute of Contemporary Art Sofia. With his ‘Temporary Alteration’, he created a short-term modification of the public space. For him this act was a way to show the ability of art to instigate change by means of minimal interventions. 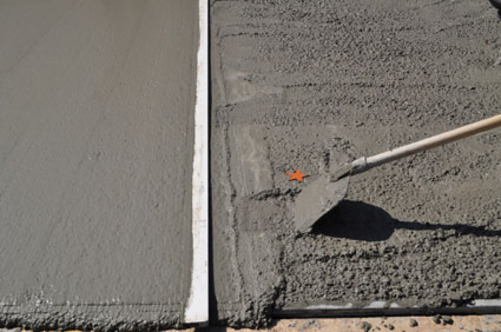 Action, photographic documentation
The red ceramic stars have been pushed into the soft concrete during the construction works on the central square in the city of Dobrich 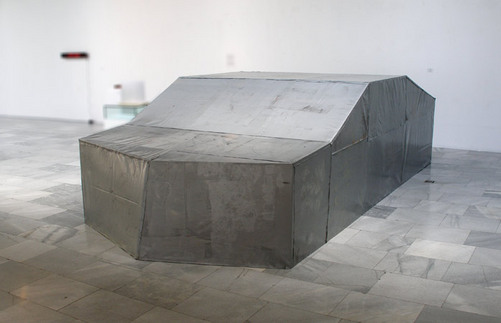 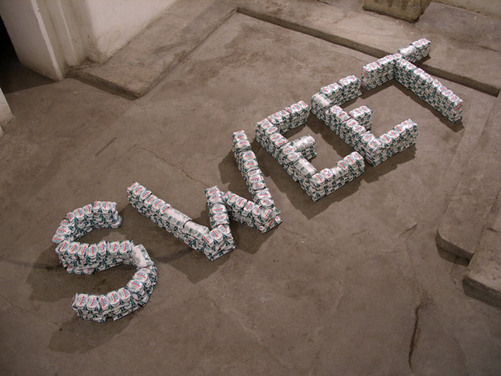 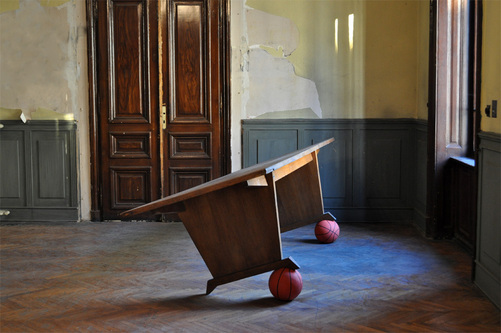 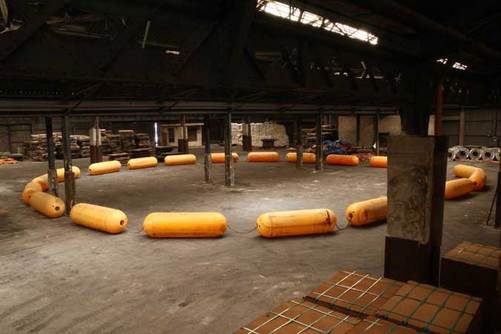