The Matter of the Moment 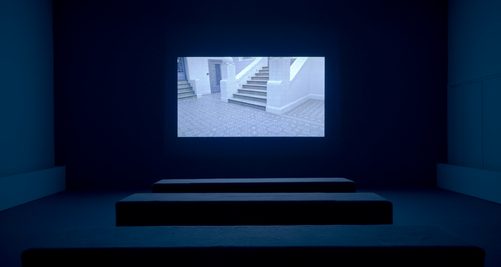 The Matter of the Moment

At the fore of artistic practice in Dublin, the gallery of Project Arts Centre engages a trans-cultural narrative, working with sparkling intelligence across local and global dialogues. No easy task, its programme is broadly informed, responding with sophistication to the personal, the social, and the political. Its activities include the commissioning of new work, presentation of solo and group exhibitions, offsite touring shows and context-responsive temporary projects. The programme’s vision seamlessly syncs the geographically local with the globally urgent, working with national and international artists as well as guest curators to produce critical, ambitious and exciting contemporary visual art. To experience an exhibition at Project Arts Centre is to witness the highly experimental tumbling comfortably over the historic, and the theoretical jiving with the pragmatic.

As such, the Visual Arts archive glitters with a stream of critically acclaimed artists, platformed in the gallery at key stages in their careers. From this rich pool of history, we have elected to speak about three artists; Jesse Jones (IE), Barbara Knezevic (AU/IE), and Ruth E Lyons (IE). Beyond our fascination with their practices, their works demonstrate the diversity of artistic approaches at play from within the Irish art scene, which have the capacity to resonate far beyond the island. Seen together, these works illustrate the malleability of perceived local/global identities, each a testament to the potential of supporting a borderless creative consciousness.

Jesse Jones occupies a rare territory that can position contemporary local economic and political tensions across social and cultural divides. Working primarily with film, she explores historical moments of collective resistance, whose relevance continues to operate today. In her work, Jones’ isolation of forms and subjects – often via the codes of Epic Theatre – become tools for re-imagining and altering social discourse.

Commissioned by Project Arts Centre in 2008, The Spectre and the Sphere reflects Jones’ interest in potential points of convergence between cultural history and revolutionary politics, activated through performance and theatrical staging. The filmic work depicts a haunting rendition of ‘the Internationale’ performed by Lydia Kavina on the Theremin. Shot on 16mm against the historically charged backdrop of the Theatre Hall in Vooruit (Ghent), the work also hosts a revisiting, through eerie whispered unison, of Karl Marx's iconic text, The Communist Manifesto. For its installation, the gallery was transformed into a cinematic space, complete with fade-in strip-lighting and seating areas. A live extension of Jones’s thrilling The Whisper Choir was performed as part of a series of artist’s events, presented in Project Arts Centre’s Cube theatre, which further contextualised and expanded on Jones’ conjuring of ideologies. 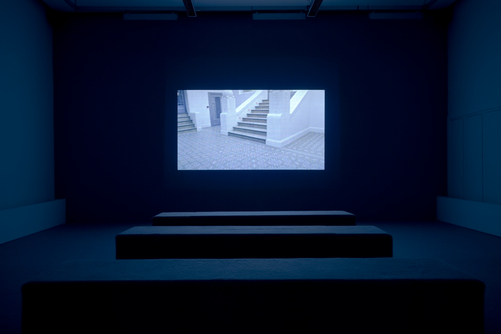 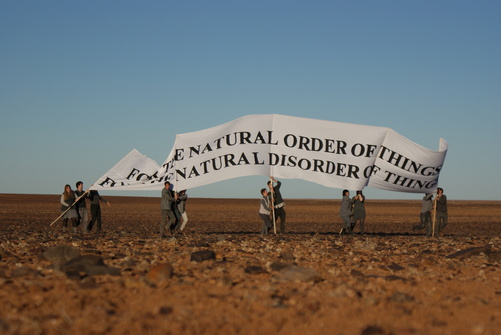 Collaboration has become increasingly integral to the artist’s practice. Engaging with diverse communities of interest, she uses long-form active research groups as a methodology for excavating meaning within the popular collective consciousness. With these embedded research projects, Jones displays her adept ability to embrace community in a very real sense, avoiding both sentimentalism and purely theoretical notions. This integrity can be seen in her work The Other North (2012), shown at Artsonje Seoul, Korea, and at the Centre for Contemporary Art Derry-Londonderry, Northern Ireland. Developed from research in South Korea and the DMZ, and enquiries into archival footage in Northern Ireland, the work references a 1974 film, documenting a conflict resolution therapy session held by an American psychologist in Northern Ireland. Working from the transcripts of these therapy sessions, Jones re-staged the film with eleven Korean actors. This meeting of material was geographically disparate but resonant in content – enacting an opportunity to consider the effects of North South divisions, culturally, politically and psychologically. 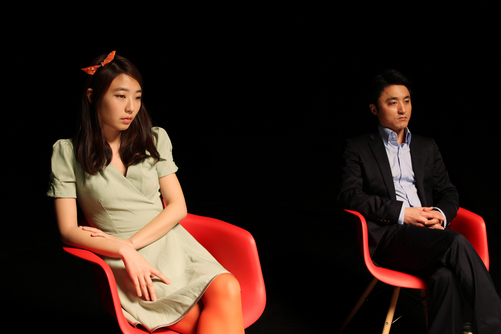 Barbara Knezevic’s practice is concerned with how objects function materially, ontologically and economically in the world. She works primarily through sculptural form, probing the peculiar human relationship to material matter, through assembling selected materials, manipulating their role, and presenting them in an art context.

Her work often refers to systems of usage, as with from them but not of them, shown as part of the group exhibition Whitewashing the Moon, at Project Arts Centre in 2012. This sculpture is made from a layering of materials – a slab of beeswax sits atop folded felt blankets, within which is placed an electric heating blanket. These layers lie on further layers of corrugated cardboard. Combining a complex organic material (beeswax) with domestic and industrial materials produces a curiosity of form. Knezevic’s ability to set objects up in conversation, and then let them take their own course, seems to demonstrate a desire to guide the audience – with a distanced touch – into dialogue with the art-object. 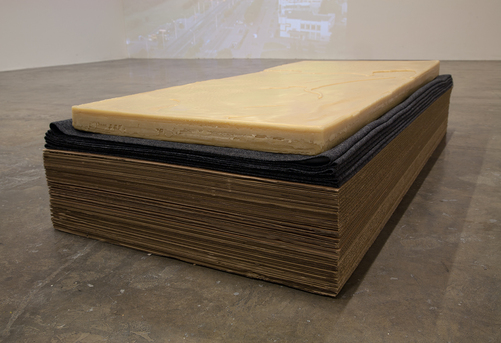 A second work, an exercise in self-destruction, also featured in Whitewashing the Moon, is composed of a microcrystalline wax hollowed form, which takes the shape of the rock from which it was cast. This is positioned directly underneath a heat lamp that slowly melts the wax while simultaneously illuminating it for display. Here the trace of the artist’s agency remains visible through the playful conceit of producing a work that is self-consuming; it exists in contingent states of being and, when on display, is suspended in a state of transformation. 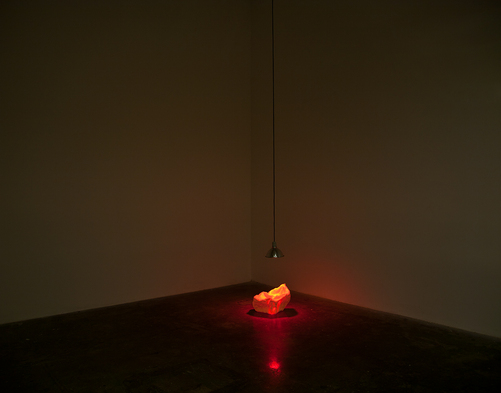 Ideas around how artworks exist are central to Knezevic’s practice. Object Registry is an artwork/publication whose role is to act as a receptacle for other artworks, the publication itself being a surrogate for an artwork, which met an unhappy fate – through accidental destruction. The book is concerned with matters of language and absence, and ideas around classification and contextualization in terms of how artworks are apprehended, and how they exist in the world. 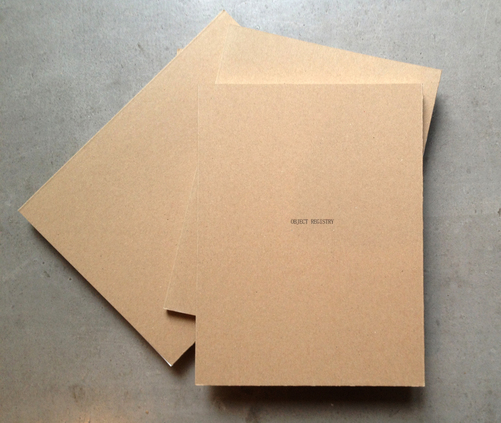 The large-scale sculptural works of artist Ruth E Lyons, are concerned primarily with landscape and our collective experience of it.

The Forgotten Works was a temporary installation commissioned by Project Arts Centre in 2012, which appeared as a cascading form across the building’s upper facade. The process of both its construction and deconstruction was considered as performative and public, viewed by an incidental audience from the street below.

The material of the work – five hundred bitumen-coated timber struts – are viewed by the artist as cultural signatures of the contemporary built environment. Bitumen, the lowest residue of oil, is a material that binds together the surfaces of the city – it is used as a primary substance in the construction of roads. At the heart of most modern cities, the fuel depot and the docklands house huge vats of this viscous material, which in some ways acts, invisibly, as the lifeblood of the urban infrastructures of our civilization. The artist describes the substance as an ancient body, essentially comprised of layers and layers of time, condensed over millennia. In this way, she sees the material as speaking of the transformative potential in all matter, to be consumed or condensed and eventually, to be reborn once again as luminous energy. 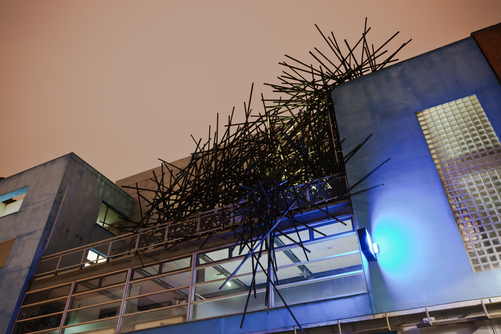 A second work by Lyons, Amphibious Sound, was exhibited within the gallery of Project Arts Centre, also in 2012, as part of the major group show Conjuring for Beginners. Another large-scale sculptural piece, Amphibious Sound had been first fabricated in 2009 on location at Lough Key Forest Park, a far-flung rural area in the northwest of Ireland. As an area, Lough Key Forest Park is known to the UFO society of Ireland as a hotspot for unexplained activity. The artwork itself forms a sprawling black mass of neoprene wetsuits (another material derived from petroleum), unpicked and re-sewn together to create a skin which when floating atop the lake, defined the separation between what the artist perceives as this realm and another. The work’s appearance in Conjuring for Beginners, saw it re-imagined as a vast black carpet in a landscape of artworks, giving space to what Lyons describes as a ‘matter reality’; making reference to the constant and infinite potential of matter and world. 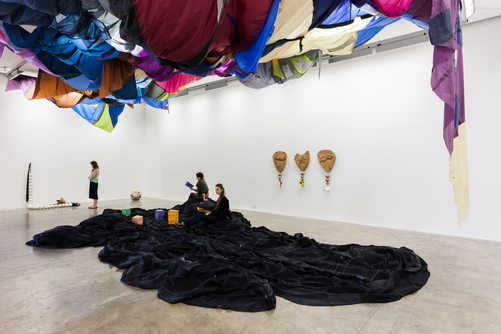 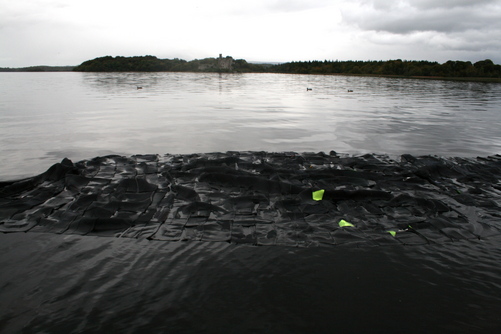 Based between Amsterdam and Dublin, RGKSKSRG is the paired curatorial practice of Rachael Gilbourne and Kate Strain. Core initiatives include commissioning, presenting and contextualizing contemporary art; each viewed variously as sites for channelling visceral aesthetic experience and systematic disjuncture. RGKSKSRG, as a joint practice, acts as a means through which to embrace conflicting ideologies, heighten agency and cultivate a combined identity.

Currently at Project Arts Centre, Dublin, RGKSKSRG inhabit the Grotto, a peripheral space in the main foyer of the building. The site is used to present an insta-archive of the wider gallery programme, curated by Tessa Giblin, and acts as a window for reflection on the rolling nature of exhibitions, and their immediate passing legacies.