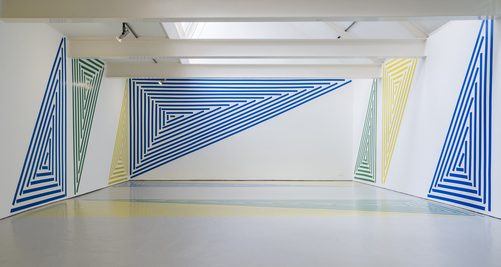 In response to the Alternative Art Guide’s invitation, OUTPOST has chosen to present three artists living and working in Norwich, all of whom, at different times, alongside many others, have helped to shape the gallery as steering committee members, artists and the community surrounding the space.

Existing in the Eastern most reaches of the UK, a few hours train travel from the country’s political and artistic centre in London, OUTPOST’s regional location in Norwich is of key significance to the identity of the space. In 2011, OUTPOST was invited to speak at the Institute of Contemporary Art, London, as part of Ryan Gander’s ‘Night School’ series of presentations. Writer and former steering committee member, Jonathan P. Watts delivered a lecture, Surrendering the OUTPOST, exploring this integral relationship to our location and which we present here alongside the work of artists, James Epps, Robert Filby and Kate Murphy.

An idea of a centre and periphery underwrites the name of the contemporary art gallery ‘OUTPOST’. Geographically, it is an outpost located in the county of Norfolk, a county without motorways, close to the coast. It is at the edge, sure, but is also peripheral in relation to the metropolitan capital London. OUTPOST is a useful name because it enfolds these two central qualities of its identity as an organisation: separateness from the metropolitan art world and isolation in a predominantly rural county.

Norwich has effective transport links, communications, clean tap water… A linear contraposition between centre and periphery is a powerful idea that has historically shaped England’s social and economic identity. It is a legacy we are still very much with: an advanced centre that irradiates light and a periphery shadowed by backwardness; a plentiful centre and a lacking periphery; a dominant centre and a submissive periphery. Entangled among these are the powerful and enduring ideas of the periphery as ‘authentic’ (local, free from the pollutions of the global market) and the centre as global (fake, bent nonetheless on producing its own authenticities). If anybody has a neat encapsulation of ‘authenticity’ I would be interested to hear it. It is not possible, or indeed useful, to reduce the exchanges between centre and periphery in a linear fashion.

Yesterday I asked OUTPOST founder-member Kaavous Clayton if for him disinterest in London was part of the initial design of the gallery: ‘Yes,’ he replied, ‘at first it was an aggressive stance. I didn’t want to get bogged down by the relationship between the gallery and London. As I saw it London drained the activity away from Norwich once students left the art school. It felt like domination. OUTPOST gave it a focus and a community. I was keen to ignore London.’ There were important examples and precedents elsewhere. Transmission Gallery in Glasgow, for example, provided an organisational model. If regional work were to be relevant and engaged in current critical debates it had to be seen amid a bigger context; for Kaavous this too could be provided by peripheral examples. I asked whether the anti-London position was an ideology shared across all of the committee. ‘No,’ he answered, ‘we realised it was possibly not a good approach, a realistic approach, to ignore London. It didn’t last very long’. OUTPOST was born out of a relationship of difference to London, through frustration and aggressive distancing.

Some years before in Norwich Phil Gardner ran a contemporary art space called ‘Frontier’ in his flat. Frontier, OUTPOST — for some reason the artist’s identity in Norwich seems couched in the language of attack, geo-political boundary, terms of colonial occupation. Put like that it makes OUTPOST sound like a settlement of metropolitan advanced art within the regions, an envoi from the Capital. Yet, an important characteristic of the settlement community is that despite maintaining ties to its homeland, it is not actually under the home state’s system of government. Does it represent the centre? Become native? Get attacked by locals? Literature and film of Western modernity is populated by eccentrics, egoists and demigods permitted to thrive in these geographical margins. Forgive me for emptying the following examples of their political meaning… Think of Mr. Kurtz in Joseph Conrad’s Heart of Darkness, the Belgian ivory trader who uses his influence over African natives to prosper; or Fitzcarraldo, the visionary who drags a paddleboat over a mountain in Werner Herzog’s film of the same title. In the humanities liminal spaces have been celebrated for their state of potential; bell hooks, with a clear political agenda, valorises peripheries as places for hybrid forms to develop away from the centre. These are only a few examples they suggest that all kinds of fascinating hybridizations and maverick things happen at the peripheries. How and why might this relate to galleries operating in peripheries? Distance from London might afford the opportunity to develop independent ideas, to move beyond boundaries? Perhaps intense working groups form more easily in small regional towns and cities in ways that are harder in the capital? Their exoticism can be attractive.

I recall reading a short sentence by the critic and chair of the New Contemporaries Sasha Craddock. ‘If you want to be an artist essentially,’ it went something like, ‘you must move to London.’ Probably it stayed with me because this essentialist statement came from a very visible agent of taste in the contemporary art world. I was a little taken back by its centralist attitude. Rather than paraphrase it, remember it through my own wonts and mores, and because by serendipity Craddock might be here tonight, I ran through search engines in order to be precise. Athens, e-flux, Frieze, Art Monthly… then I found it in my inbox, in an email from Standpoint Gallery in Hoxton via OUTPOST. It read: ‘Artists from say, Liverpool, Newcastle or the countryside, can be more cut off than artists from Europe; and years of decentralization has tended to hide the essential value of London to regional artists.’

This is a specious comment. It must be said that Liverpool and ‘the countryside’ — I’m guessing the British countryside (where thousands of Londoners go at the weekend to get away from the city — it could be anywhere as long as it is not London) — are part of Europe. Otherwise I do not dispute that London might be of importance to regional artists. Though to fix the echo of the imperialist logic of dominance and dependence I insist on swapping ‘London’ with ‘regional arts’ and ‘de-centralisation’ with ‘centralisation’, maybe editing it a little too. To rephrase: ‘centralisation has tended to hide the essential value of regional arts to London.’ The question is, are these regional arts compatible with London?

‘The work comes through a period of experimenting, and exploring the possibilities of what an artwork might be. I don’t attempt to transform the materials, I’m interested in utilising the qualities they already posses. The works seldom refer to anything other than themselves, they are about the process of making.’ 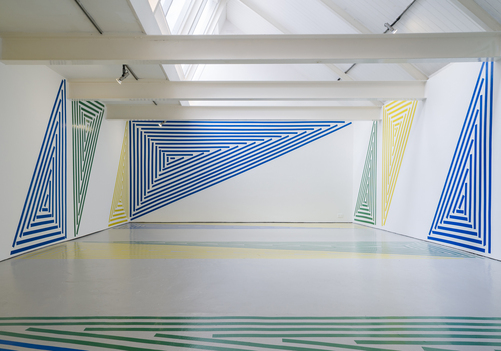 Gaffer Tape Piece, Gaffer tape, As exhibited in Just Like That, OUTPOST, 2014

Gaffer Tape Piece, Gaffer tape, As exhibited in Just Like That, OUTPOST, 2014 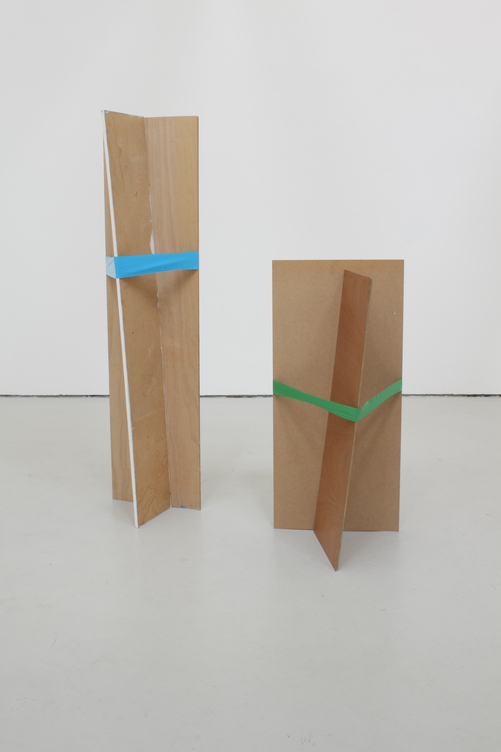 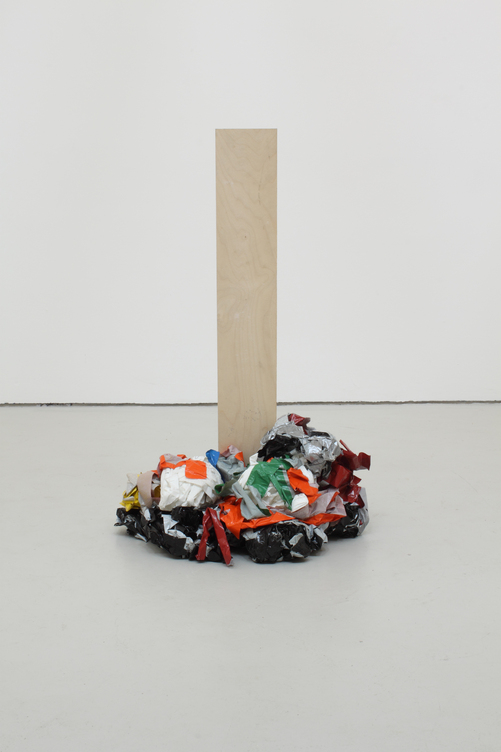 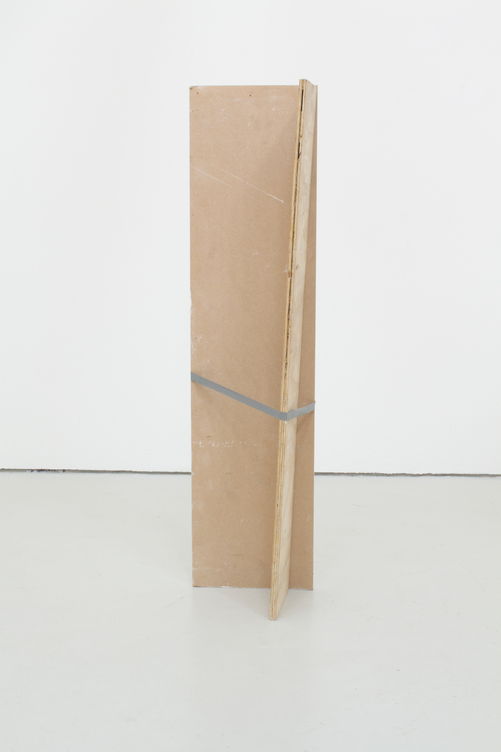 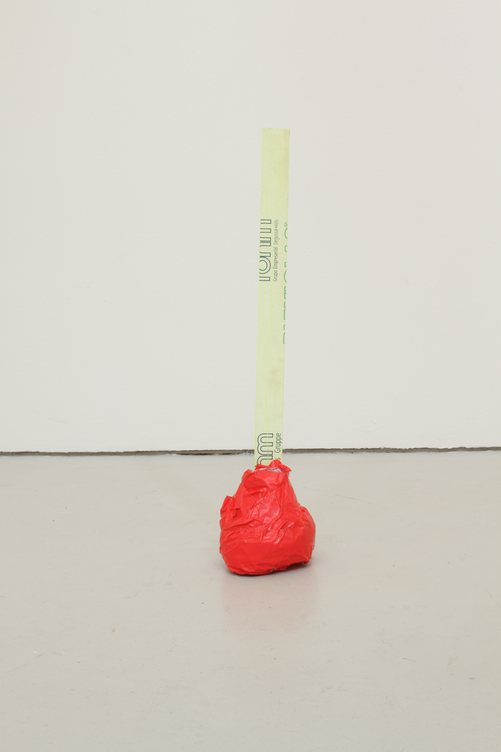 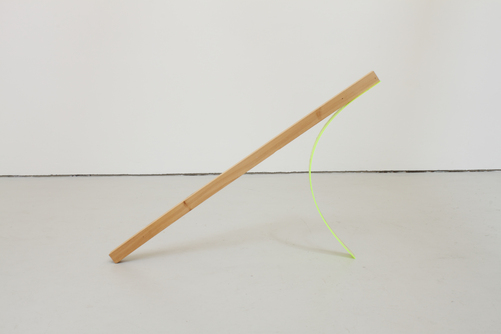 ‘My work is devolved from or compelled by the obtusity or currency of art-making as an effective means to communication, and is amused by a primary impersonal relationship with objects. I’m interested in objecthood, and the art object’s validity to those around it, including disinterested parties, and thereon, the ignorance or oblivion that we are dependent on in a state of being an audience.

To describe my practice as a whole, I’ll mention two strands that posit themselves as outside of my practice proper. Not in chronological order, the first is a series of photographed collages entitled Mood Boards, which precede and might preclude as-yet-unrealised works, since they are declared as works themselves. The second, after the event, is Work & Co., another photographic project documenting the made work in the attendance of domestic cats, which intend to offer a way of looking at the depicted work that is not according to our usual interpretive habit, and serve also to example a level of temperament that engages me within works outside of this remit. In each of these two strands there is an artlessness in their direct address of ideas, communication, creation, and audience; fundamentals within an art practice.

How I think about the subjected work can in turn be both limited and liberated by this construct, but between these ploys, which frame my practice conversationally, there is allowed a certain range in style; detached sculpturally-concerned works of a modest scale which move typically and formally only between the two- and three-dimensional.’ 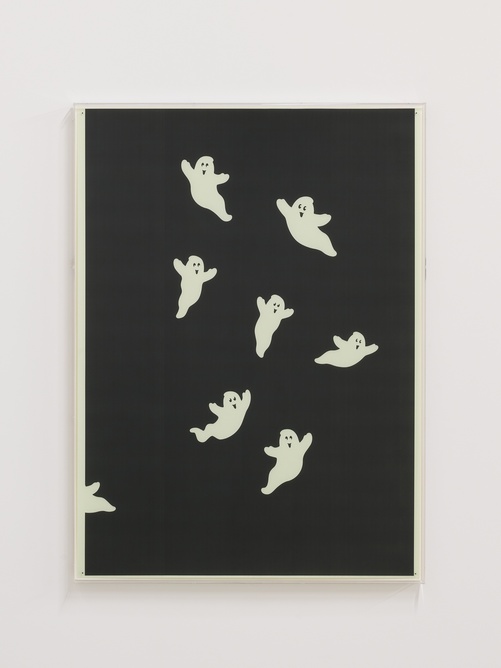 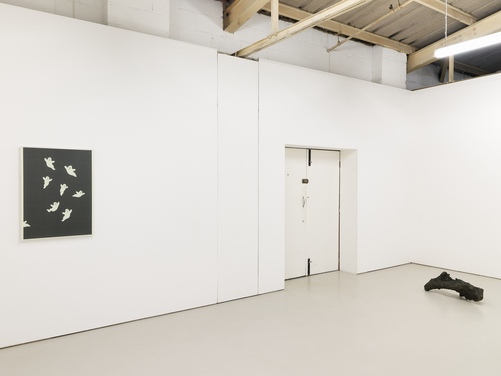 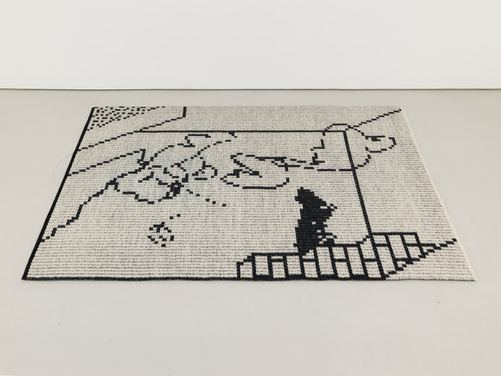 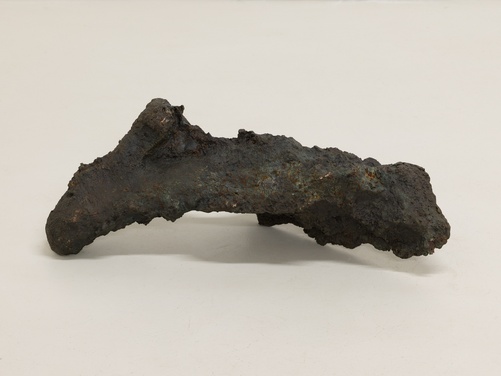 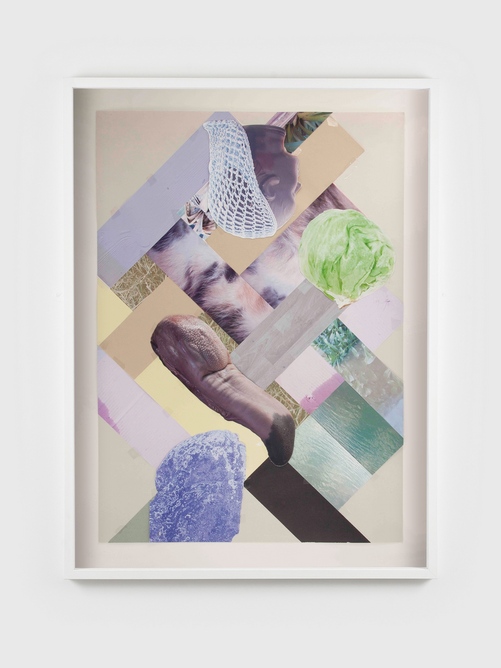 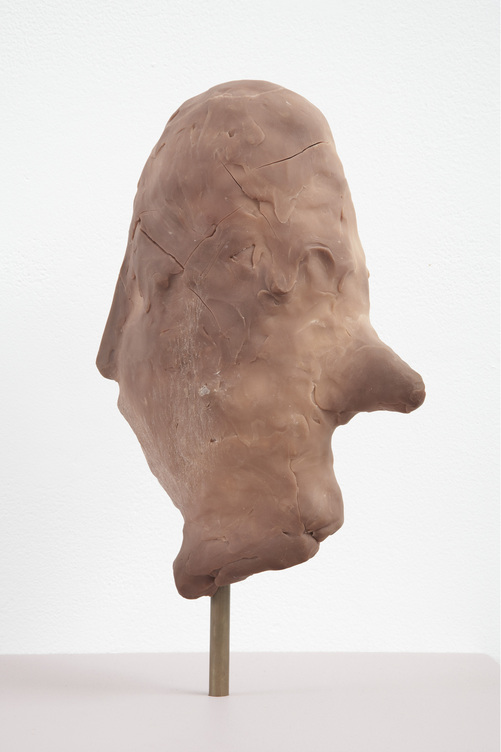 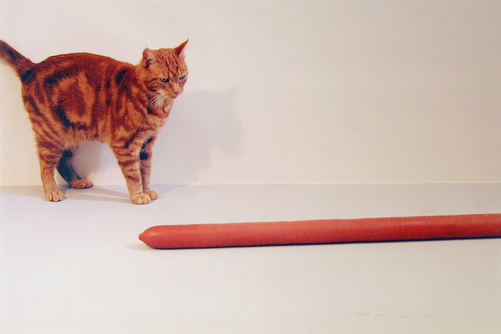 ‘I make digital videos, recording my environment without seeking it out for the work’s sake. Using the camera as an accessory I film the way I would otherwise look at things but with the enhanced facility to zoom in and out. The panning speed is a match to how one might naturally flit between sights and moods. The video camera is led into action with hand held quivers, tracing the edges of things as objects feed themselves through and are fed into view. Presented here are stills from “Walking in the wiiiiiiiiild. Friendly familyyyyyyyyy. Runniiiing behiiiiiiiiiiind. Mmmmmmmmmaggot. I’ve never seen so many”.  In this video I sing to the things I am filming, the live audio revealing my focus and level of engagement at the time of filming. My own dull-mindedness overflows into an additional apparatus for making the video. The videos I make are only descriptive records of the time at which they were made. They are describing a live experience. In its display the work is formed. Unedited clips and finished videos are set together in the format of a looping showreel that is made on the day of its exhibition. The showreel holds the tone of a different live time. The live aspect can be felt in the work when watched. The feeling the work makes in the viewer, a feeling that is live at the time of viewing and can be carried and thought on after, is the reason for making and showing the work.’ 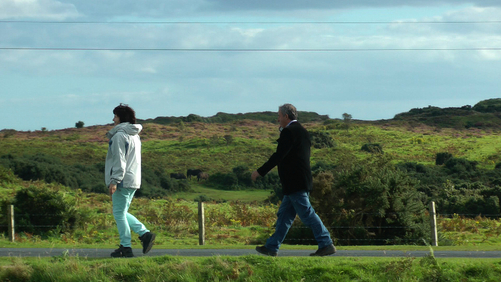 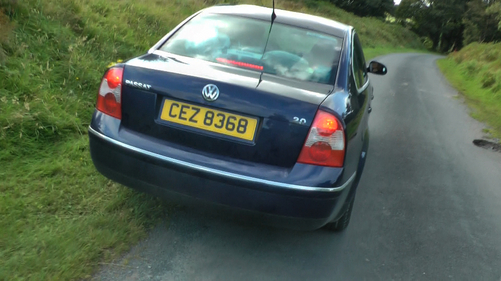 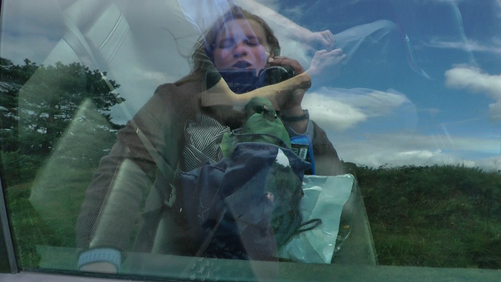 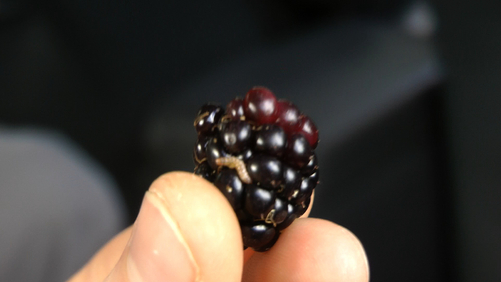 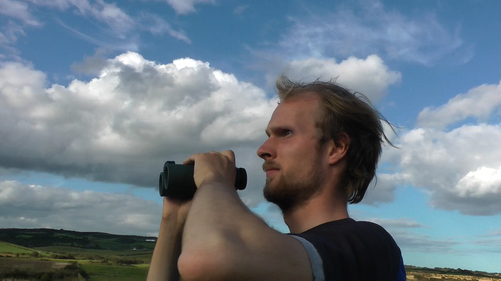 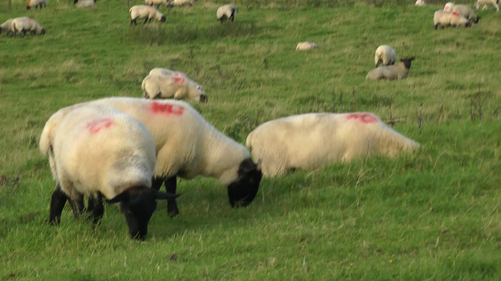 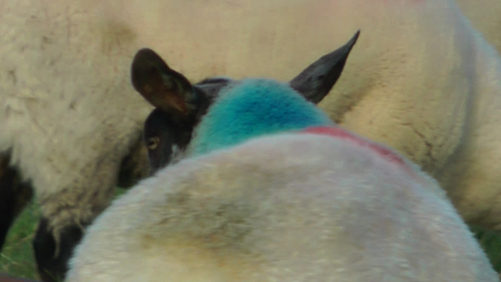 OUTPOST is an artist-run gallery, based in Norwich, committed to the uncompromising presentation of contemporary art. Since its founding in 2004, OUTPOST has established itself as a leading centre for artist activity in the east of England, producing a core programme of 11 exhibitions per year. Exhibitions open on the 1st of the month, February to December, 6 – 9pm and run from the 2nd to 21st of the month, February to December, 12 – 6pm. Alongside, OUTPOST operates a programme of offsite projects, events and artist editions, as well as running OUTPOST studios, providing affordable studio spaces for close to 100 artists working in Norwich.

OUTPOST is supported by a diverse membership of creative practitioners, providing a critical network for a community inside and beyond Norwich, who in turn create a diverse, informed, and engaged gallery audience. The gallery is run by a rotating Steering Committee of up to eight members, drawn from the membership, with a limit of two years service.