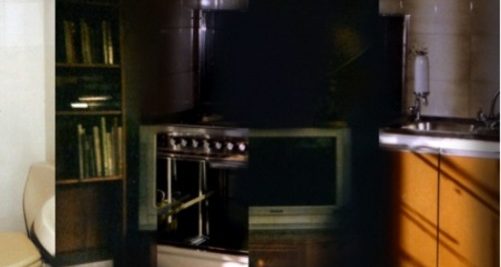 For the Alternative Art Guide I have chosen three emerging London-based artists who in my view represent exciting developments in three different fields in art: Video, Photography and Installation.  Of course, it is completely impossible to use these to somehow summarise everything that is happening in London, so I have taken the only possible viewpoint – a subjective one.  I have chosen three artists with particularly ambitious forthcoming large-scale solo projects which are about to be realised in our artist-led project space.  I am thus able to speak about hem authoritatively from my own close curatorial experience.  Moreover, these are, to me, important examples of the role of the artist-run space, as a base for important non-commercial experimentation available at an early stage of an artist’s career.

The first of these, Helene Kazan, is a multidisciplinary artist who has exhibited extensively in the UK and internationally. Across her practice, she uses research and archival material to generate moving image and mixed media sculptural installations. She is currently completing a Masters at the Centre for Research Architecture at Goldsmiths, University of London.

Her forthcoming exhibition with us in April and May 2013, entitled ‘A Domestic Image of Preemption’, Helene Kazan has created a multimedia installation, which sets the ordinary image of the domestic space against a complex conceptual framework of pre-emption. Bringing together under one roof a sequence of interacting moving images made using a unique methodology of extracting visual information found in a set of photographs, the space depicted in each is reproduced, with the films revealing the potentially catastrophic breaking point under which each photograph is generated. Here, the architecture of the home is shown to transform, through a set of overarching conditions, from a space of shelter to a space of potent threat. 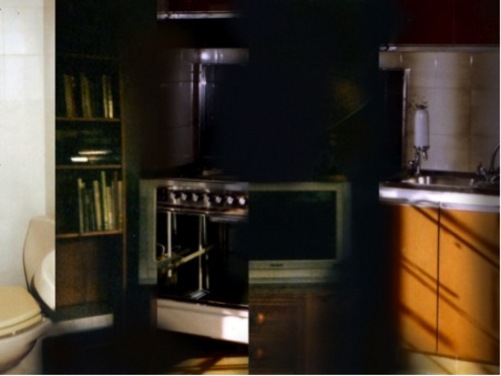 Operating through the potential of these visual objects and unlocking the information harboured within them, Kazan utilises the elasticity and fluidity of time that is brought to light by this conceptual framework. The tensions of a limited futurity are activated through the use of filmmaking processes to trick time, capture it and then playfully traverse through it. Revealing to the viewer a narrated dialogue formed between the independent, yet interconnected scenarios. Illustrating the dissemination of sovereign power through these conditions, and therefore how domestic space is re-fabricated within the parameters of its control. 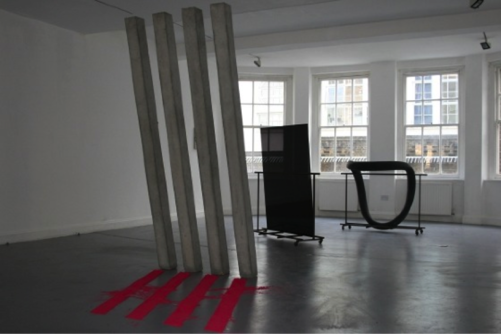 The second artist I have chosen, Rab Harling, specializes in experimental large-format photography and photographic installations. He investigates the social occupation of space – from domestic interiors to the urban landscape and focuses on how people construct a sense of place, and how built environments reflect and actively produce particular social configurations and political ideologies.  Rab’s work intersects with a long-term debate in urban culture and policy regarding the relationships between environment and behaviour.

Trained in the film industry, Rab turned to fine-art photography in 2006, completing an MA in Photography at the London College of Communication, University of the Arts.

Employing a variety of photographic processes, from large format film to digital and low-resolution video, the underlying technical aspects of his work involve pushing each of the involved media to their limits, from extremely long exposures to giant site-specific installations, his work is always pushing at the boundaries of a contemporary photographic practice.

Rab Harling, has been working on an ambitious, 3-year photography project, which is the subject for an interim show of his work at our space in autumn 2013.  Since 2011 he has been documenting the brutalist Balfron Tower, designed by Arno Goldfinger and occupied for decades by council tenants.  When the tower was listed for renovation and an eviction programme began to displace the current tenants in order make the tower available to new, wealthier, private tenants, Harling began to document its final transition from old to new utopia.  In the interim, empty flats have been given over to artists as temporary work-live spaces by the Bow Arts Trust.  Rab has been documenting the interior of each flat using large format photgarphy, from the very beginning of the process, eventually moving in as a resident himself in order to be able to work more closely with the residents.

The third ‘artist’ is a pair of artists who have been collaborating since their BA – Paul Good and Kirsty Wood.  As well as producing work, for two years they ran a finely tuned and sensitively programmed project space from their flat in a mostly abandoned tower block in East London.  The block was scheduled for demolition and a small number of artists were living there temporarily while they site was waiting for property developers to begin.  Hard to get to and attended mostly by other artists, the space held some of the best shows of 2010 and 2011.  In 2010 I invited the pair, then know as less, to present their own work at my temporary space on Farringdon Road.

less. began as a minimalist art rock band, at first separate to, but later an extension of their own individual art practices. Collaborating artists Paul Good and Kirsty Wood created installations using symbols, relics and paraphernalia from the original band.

The show was called ‘to solidify a negative space (three part score for The Magnificent Basement only)’ and was a visual representation of an ongoing body of work originating as scores and recordings of less. now becoming site-specific installations.

The artists brought in several gallons of liquid rubber, which they used to cast the walls of the space.  Work seen was the remainders of a past action. The walls cast in rubber were pulled from the wall to collapse under their own weight. The score marked an uneasy fall or crescendo of sound with a small drum part cast in plaster, lost within the mass. The title words ‘negative space’ refers to the artists’ exploration of silence within music and how to frame what is formless.  The partially peeled inner cast was shown as an installation for just one week before being tragically destroyed by the owners of the space. 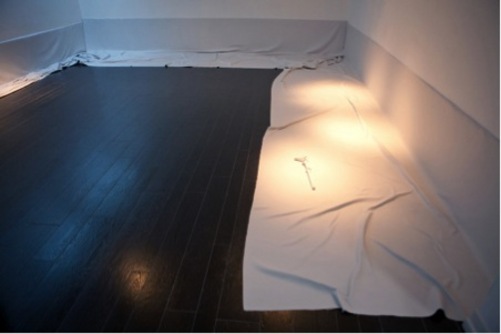 Three years later, the artists, still working together, but under their own names, are preparing a large scale installation of multiple casts in our space.  Ambitious as ever, they plan to completely fill the space with cast objects and then use their bodies to physically break a path into the interior, which will be the only entrance point for visitors to their show.

Iavor Lubomirov was born in 1978 in Bulgaria and lives and works in London, United Kingdom.  Since 2005 Iavor has worked as an independent artist, curator and exhibition organiser.

Iavor Lubomirov is one of the founders of The Artist-Led Initiatives Support Network (ALISN), in May 2007, with the aim of supporting emerging artists and fostering community and collaboration between artist-led and other emerging art galleries and projects.

ALISN works across diverse platforms to deliver innovative exhibitions, events, performances, open submissions, talks, residencies and art networking events. ALISN brings together a large section of British emerging art organisers at an annual Conference in collaboration with Goldsmiths University. ALISN runs LUBOMIROV-EASTON, a Deptford based project space where invited emerging artists can develop ambitious solo or two person projects.  ALISN has previously ran other temporary and pop-up project spaces and works regularly through other artist-run, academic, public and commercial spaces.  In January 2013 ALISN sublet a booth at a major commercial London art fair in order to conduct a critical examination of the art fair as an exclusive market place.  ALISN subverted the traditional booth, by cheaply subletting one to a cross section of important artist-led spaces, most of which would not normally consider showing in this environment.